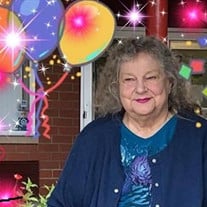 Bernadette M. Kalinowski A longtime resident of the Pittsburgh area, passed away peacefully on January 20, 2020 at 81 years young. She was born in the South Side of Pittsburgh on October 21, 1938 to the late Bernard and Gizella (Stibrik) Milowski. Bernadette was the mother of five daughters; Cynthia Bauman, Diana Kaye, Kimberly Swinchock, Lisa Kalinowski and Bernadette Lusk of whom she always bragged how beautiful her girls were. She was the proud grandma of Jason Swinchock, Rachal Estle, Tom Bauman, Scott Bauman, Sarah Penrod and Jamie Lukich. And, she had four great grandchildren Lacey, Damien, Riley and Logan whom she lovingly referred to as her 'petunia's' just as her Bubba called her. She was preceded in death by her husband Thomas and baby sister Patricia Westerman. Growing up, Bernadette walked every day to school at St. Michael's R.C. Church on Pius Street in the South Side Slopes and enjoyed playing in her Bubba's garden picking petunias just below 18th street. This is where her love of planting flowers and roses began. For many years, Bernadette worked for John J. Kane Regional Center of Scott Township where she enjoyed caring for her patients and making friends with many co-workers before retiring. During her retirement, bingo, crafting, eating out and shopping at the dollar stores became her daily routine along with spending lots of time with her best friend whom she called 'sister', Edna Mae. She loved to talk for hours on the phone with her daughters discussing her daily activities! Bernadette had a love of all animals, especially her cats who she gave good homes to over the years. Being respectful of Bernadette's wishes, there will be no service. A memorial is being planned at a future date. Memorial gifts can be made in Bernadette's name to either the Humane Society or the Susan G. Komen Breast Cancer Foundation. Rest peacefully our beautiful momma.. Professional Services trusted to D'ALESSANDRO FUNERAL HOME and CREMATORY LTD., Lawrenceville.

Bernadette M. Kalinowski A longtime resident of the Pittsburgh area, passed away peacefully on January 20, 2020 at 81 years young. She was born in the South Side of Pittsburgh on October 21, 1938 to the late Bernard and Gizella (Stibrik) Milowski.... View Obituary & Service Information

The family of Bernadette Kalinowski created this Life Tributes page to make it easy to share your memories.

Bernadette M. Kalinowski
A longtime resident of the Pittsburgh...

Send flowers to the Kalinowski family.