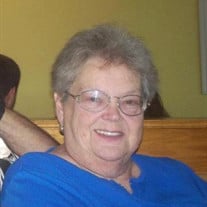 Betty Jo (Lee) Griffith, 81, of Cabot, PA, formerly of Clarion and Pittsburgh, PA, passed away on Jan. 8, 2021 after an extended illness. One of eight children, Betty Jo was born on October 26, 1939 in Morris, IL, she was the daughter of the late Erwin and Velma (Finch) Lee. She married Lt. Col Donald Griffith in April, 1959, in Reno, NV. They went on to have 8 children and lived the full Air Force family life in various military bases around the U.S. before settling down in Clarion. They were married for 21 years, when Don was tragically killed in a plane crash on October 16, 1980. Betty Jo was a strong and loving mother who proudly continued to raise her children. In the early years she was a dedicated homemaker before finding her passion in driving school bus. She drove bus for over 30 years for Clarion, Keystone and Clarion-Limestone school districts. One of her greatest joys was attending her children's high school activities, which included football, basketball, wrestling, track and field, the Clarion Singers and various choral events. She also enjoyed watching her son Tim play college football at CMU. She dedicated her summers as a strong supporter of the Clarion High Rollers for many years. She participated in league bowling at Ragley's and attending state bowling events with her daughter Colette. She enjoyed her time researching genealogy, accumulating books and books of ancestral history. Betty Jo loved to travel, especially to see her children, grandchildren and her family in Illinois. She was known to just pack up and go, at a moment's notice, or to drive to Pittsburgh to have dinner with her kids. She was kind and generous, often known to help a person in need, instead of paying her own bills. She offered her big house to many guests over the years. Friends and family always had a place to stay. She would never hesitate to offer up her four strong boys to anyone that needed help. In her later years, she had a special friendship with Arnold Kepple. She looked forward to every Memorial Day weekend, where the whole family spent time together camping at Arnie's. She enjoyed listening to the stories her children and grandchildren would tell and retell. There was never a dull moment at camp. Betty Jo is survived by seven children: Colette Griffith of Pittsburgh, Jeannette (John) Nash of Stem, NC, Timothy Griffith of Randolph, NJ, Ronald Griffith of Frankford, DE, Michael (Kim) Griffith of Pittsburgh, Lawrence Griffith of Pittsburgh, Paulette (Michael) Aites of Cabot, PA. Grandchildren: Patrick Griffith, Travis Nash, James Nash, April Ball, Jillian Griffith, Kali Jo Griffith, Thomas Griffith, Mikia French, James Cullimore, Corey Griffith, Abby Griffith, Amber Griffith, Steven Griffith, Becca Stromyer, Marcus Stromyer, Alex (Lexie) Aites, Elizabeth Aites and Brayanna Aites and 11 great-grandchildren. She is survived by one sister, Mildred Scott of Bloomington, IL and sister-in-law Betty Griffith of Sligo, PA, and numerous nieces and nephews. Betty Jo was proceed in death by her husband Don, infant son Terrence, grandson John Nash; her parents, brothers; Ralph Lee, Robert Lee, Richard Lee and sisters; Mary Ellen Punke, Ann Williams and Lora Jackson and in-laws: Paul Griffith, Judy Lee, Pat Lee, Dale Punke, Bob Williams, Jim Jackson. The family would like to say a special thank you to Good Samaritan Hospice of Cabot. Funeral arrangements are being handled by D'Alessandro Funeral Home and Crematory LTD located in Lawrenceville, PA. Per her wishes, there will be no funeral services at this time. At a later date, she will be buried with her husband and infant son in Mazon, IL. Friends and family are welcome to send online condolences and memorials by visiting www.dalessandroltd.com .

Betty Jo (Lee) Griffith, 81, of Cabot, PA, formerly of Clarion and Pittsburgh, PA, passed away on Jan. 8, 2021 after an extended illness. One of eight children, Betty Jo was born on October 26, 1939 in Morris, IL, she was the daughter of the... View Obituary & Service Information

The family of Betty Jo Griffith created this Life Tributes page to make it easy to share your memories.

Send flowers to the Griffith family.