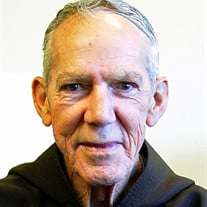 VINCENT Brother Alfred Francis Died Thursday, June 9, 2016, at Sacred Heart Nursing Home in Hyattsville, MD. He was 87. Born in Keene, NH, to Omer and Dora (Provencher) Vincent on January 28, 1929, Brother Alfred was baptized at St. Bernard Church in Keene and later attended the parish elementary school. He graduated from the Keene public high school in 1947. Brother Alfred was preceded in death by his parents and two brothers, Lawrence and Paul, and two sisters, Marion Rocheleau and Evelyn Tower Wyman. He is survived by his brother George Vincent of Keene, NH, and numerous nieces and nephews. In 1948 he was inducted into the U. S. Army and was wounded in the Korean War in 1950. He was discharged with honors from military service in 1951. Brother Alfred was invested with the Capuchin habit on August 21, 1956. One year later he professed temporary vows as a Capuchin friar, and on August 22, 1960, he made his perpetual profession. His initial assignment was fraternity service at St. Mary Friary in Herman, PA. In 1961 Brother Alfred was sent to the missions of Papua New Guinea, where he served for 24 years. His first assignment was at the Capuchin and diocesan headquarters in Mendi of the Southern Highlands Province. Three years later he was sent to Queen of the Friars Minor Friary in Kagua. After only a few years Brother Alfred became a prolific builder of various mission facilities. Needs for his construction talents dictated his assignments for the duration of his missionary labors. He worked on projects in Ialibu, Tari, Komo, Pureni and Mendi. Brother Alfred trained local men as carpenters who accompanied him on all of his construction assignments. He was admired for his strong work ethic and tireless labors and attracted young people to himself, his work and the Catholic faith. He returned to the United States in 1985 and took up maintenance responsibilities at Capuchin College in Washington, DC, which he faithfully discharged until ill health required nursing home care in 2012. He resided at Sacred Heart Nursing Home in Hyattsville until his passing. Brother Alfred will be remembered for his intense prayerfulness, always faithful to community and personal prayer. In the missions and at Capuchin College, he was always in the chapel before anyone else. It is said that Brother Al prayed as much as he worked, which was all the time. He loved being a Capuchin friar and was a source of inspiration to young friars. His body will be received at St. Augustine Friary (221- 36th Street), with visitation on Sunday, June 12, in the chapel from 2PM to 4PM and 7PM to 9PM. The wake will be at 8PM. The Mass of Christian Burial will be celebrated at Our Lady of the Angels Parish, St. Augustine Church (225 - 37th Street) on Monday, June 13th at 11AM. Burial will be in the Friars' Plot of St. Augustine Cemetery. Donations in honor of Brother Alfred may be made to the Capuchin Friars, 220 37th Street, Pittsburgh, PA, 15201. Professional services trusted to D'Alessandro Funeral Home and Crematory Ltd., Lawrenceville. dalessandroltd.com

The family of Brother Alfred Francis Vincent, O.F.M. Cap. created this Life Tributes page to make it easy to share your memories.