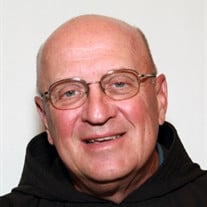 BROTHER RICHARD LUBOMSKI, O.F.M. Cap. Brother Richard Lubomski, OFM Cap., died on Monday afternoon, February 8, 2021 at Shadyside Hospital in Pittsburgh, PA, from complications arising from infection by the Covid-19 virus. He was 76 years of age. Richard Joseph Lubomski was born in Pittsburgh to Joseph A. and Frances (Staresinic) Lubomski on December 21, 1944. He was baptized at St. Anthony Church and educated at the parish grade school in Millvale before attending Shaler Public High School. Even before his senior year at Shaler, young Richard felt a powerful call to religious life as a Capuchin Brother. Having the firm support of his parents and pastor, he wrote repeatedly to the vocation director seeking application to the Capuchin Friars. His persistence was rewarded and he entered the Capuchin Brothers Training Center in Cumberland, MD in August of 1961. After a year of initial orientation and primary training, Richard was invested with the Capuchin habit and entered the novitiate at Annapolis, MD on August 21, 1962 where he received the religious name "Aloysius" (which he readily relinquished when given the opportunity to return to his baptismal name in 1968). He vowed to observe the evangelical counsels of poverty, chastity and obedience on August 22, 1962 before returning to Cumberland to complete his vocational training. From the beginning Brother Richard's aptitudes and interests were oriented to practical ways of serving. He was always at his best doing work that required detail awareness and concentration, and readily learned the skills of tailoring and the requirements of bookkeeping. He would serve the Province in these capacities for most of his 57 years in religious vows, principally in Annapolis and Baltimore in Maryland, in Washington, D.C. with shorter tours in Herman, PA and Cleveland, OH before returning to the Pittsburgh area in 1986 Brother Richard had a fine mind for organization and order, and he executed all tasks given him with determination and precision, often pushing himself to exhaustion in order to complete a task as thoroughly and efficiently as possible. His reputation as a hard and diligent worker followed him throughout his years as a friar. Brother Richard was a gentleman in the true sense of the word: affable, polite and courteous in his speech and actions; he was meticulous in his habits and ever neat and well-groomed in his appearance. He was warm and sensitive by nature and easily embarrassed by crude or vulgar behavior. Even though a true introvert, he was perceptive, very thoughtful, and a skilled listener. These qualities, along with many others, led to his twice being entrusted with the responsibilities of serving as Guardian (local superior), first at St. Augustine friary for seven years, from 2003 until 2010, and then for five additional years at St. Conrad friary in Allison Park from 2011 until 2016. These attributes also allowed him to make friends easily and to keep them close to him over time. From start to finish Brother Richard was mindful of the dignity and beauty of his vocation as a Capuchin Brother. He loved his vocation and was steadfast in encouraging candidates and young friars to appreciate the value of being a religious Brother. His Franciscan heart was especially evident in his respect for others, his diligence at work and his welcoming personality. First and foremost, he was a man of God, faithful to prayer. He was a lifelong fan of Pittsburgh's sports teams. The Pirates, the Steelers, and even the Pitt Panthers always had his attention from spring training to the Super Bowl. He thoroughly enjoyed good pastries, Broadway plays and musicals, opera, and intimate gatherings with good friends. Health concerns began to arise for Brother Richard in autumn of 2016, when he was diagnosed with non-Hodgkins lymphoma. Although he was successfully treated for the cancer he continued to struggle with a series of illnesses and medical conditions for the remainder of his life, causing him to pull back from many of the larger and more public events and gatherings. It is ironic and sad that he was so aware of and cautious about the dangers of Covid infection, taking every reasonable precaution against infection only to be infected with the pandemic virus in mid-January. Nevertheless, Richard remained faith-filled, cheerful and grateful to all those who helped him, praising and thanking the doctors and nurses at Shadyside who cared for him in his last days of life. He passed into eternal life around 4:30 P.M. on Monday, February 8th, with his Provincial Minister and dear friends at his side accompanying him in prayer. Brother Richard was preceded in death by his parents and his sister Carole (Luczak). He is survived by his sisters Barbara Meidel and Terri Happ, and his brother Robert. His body will be received by the friars at St. Augustine Friary on Friday, February 12th. Visitation will be held from 7 to 8 PM in Saint Augustine Church of Our Lady of the Angels Parish, 225 37th Street, Pittsburgh, concluding with a Vigil Service beginning at 8 PM. The Mass of Christian Burial will be celebrated at Our Lady of the Angels Parish, Saint Augustine Church in Lawrenceville on Saturday, February 13th at 10 AM with interment following in the friars' plot of St. Augustine Cemetery.Donations in memory of Brother Richard may be made to the Capuchin Friars, 220 37th Street, Pittsburgh, PA 15201. Professional Services trusted to D'ALESSANDRO FUNERAL HOME and CREMATORY LTD., Lawrenceville. www.dalessandroltd.com

The family of Brother Richard Lubomski, OFM Cap. created this Life Tributes page to make it easy to share your memories.