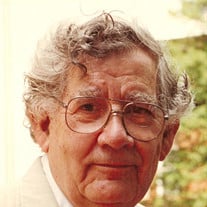 Hardman, Carl C, age 96, died at home in Squirrel Hill on Sept 4, 2015. Carl is survived by his wife of 67 years, Annette, and their 3 children, 7 grandchildren and 2 great-grandchildren. Carl was born in Atlantic City, NJ, in 1919. The first in his family to go to college, he received a B.S. from Penn State in 1941 and then joined the Air Force, where he served as a navigator on missions over the Pacific from 1943 to 1945, rising to the rank of 2nd lieutenant. During this period he earned a Distinguished Flying Cross, 3 Air Medals, and 2 Battle Stars: one for the Eastern Mandates Campaign and one for the Air Offensive Against Japan. He also earned one unit citation for mining the Inland Sea. After the war, Carl pursued graduate studies at the U. of Wisconsin, obtaining an advanced degree in chemical engineering. He worked on developing more efficient electric storage batteries (especially for cars) at companies including Union Carbide (Cleveland) Diamond Alkali (Houston) Aerovox (New Bedford, MA) and finally to Westinghouse, in Pittsburgh, where he worked as senior engineer until his retirement. Over the years, his scientific research resulted in 7 patents. Carl, known as "Ducky" to many family members and friends, had a corny sense of humor and a deep, contagious laugh, which he applied most often to himself. He was an avid reader all his life, loved movies--especially those from his childhood and youth-and had a prodigious, legendary memory for everything he'd seen and read. He was keenly intelligent, sentimental, temperamental, curious and eccentric in the best possible way. We will miss him very much. Professional Services by D'Alessandro Funeral Home and Crematory Ltd., Lawrenceville www.dalessandroltd.com

Hardman, Carl C, age 96, died at home in Squirrel Hill on Sept 4, 2015. Carl is survived by his wife of 67 years, Annette, and their 3 children, 7 grandchildren and 2 great-grandchildren. Carl was born in Atlantic City, NJ, in 1919. The first... View Obituary & Service Information

The family of Carl C. Hardman created this Life Tributes page to make it easy to share your memories.

Send flowers to the Hardman family.