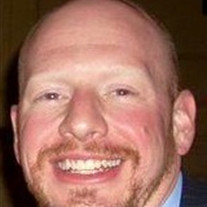 Carl C. Hoekelman, 40, Pittsburgh, PA died January 30,2019 after a spirited eight year struggle with brain cancer. He valued work, fun with friends, cycling, road trips, NHL hockey, cooking, witty conversation and good books. Carl rode a 1000 miles in the year after the first surgery. Recently, a red flag-- intracranial pressure, led to a startling downward course at University of Pittsburgh Medical Center, (UPMC) in Shadyside. After days in Neurological ICU, Carl moved to palliative care at Canterbury Place where friends still visited. Family was present at the end. Carl was the only child of William J. (Bill) and Margaret (Campbell) Hoekelman of Lexington KY. Born in Birmingham AL, Carl moved to Lexington, KYat age four. He was predeceased by paternal grandparents, Harold and Ruth (Pettie) Hoekelman, Sarasota, FL and maternal grandparents, Roderick and Caroline (Burke) Campbell, Sydney, Nova Scotia. Carl's summers involved Burke's bungalow and stints in Ingonish kayaking and cycling along the Cabot Trail. Carl was the youngest member of the Wheelmen, now the Bluegrass Cycling Club. A graduate of Lafayette High, Carl was co-captain of speech team and newspaper editor. At University of Kentucky, he majored in print journalism with a minor in political science and worked as a YMCA swim instructor/lifeguard. He was on the UK cycling team, program host on its independent radio station and a columnist for the daily KY Kernel, graduating in 2001. In Seattle, Carl explored the northwest working in operations at Washington Audiology. He later moved to Pittsburgh and graduated with a M.A. in Industrial and Labor Relations at Indiana University of PA. In 2006, he was awarded an internship with the Association of PA State College and University Faculties in Harrisburg, PA where he analyzed collective bargaining agreements with staff, the State System of Higher Education and all arbitration and Labor Board decisions. A second internship with the United Steelworkers of America in Corporate Research, Pension, Benefits and Collective Bargaining Department in Pittsburgh had appeal. More recently, Carl's work history involved Bank of America, AmeriSourceBergen and PNC. He enjoyed projects around his house, often relying on his Dad's expertise with larger improvements. At the non-profit Red Lantern Bike Shop in Braddock, Carl volunteered by repairing bikes for local children without one. Arrangements are entrusted to D' Alessandro Funeral Home and Crematory Ltd.. Cremation has taken place. A Memorial Mass will be celebrated at Madonna del Castello, Swissvale, Saturday, February 16 at 11:30 a.m. A gathering of friends will commemorate Carl's life. Remembrances may be made to a charity or organization of choice.

The family of Carl C. Hoekelman created this Life Tributes page to make it easy to share your memories.

Send flowers to the Hoekelman family.