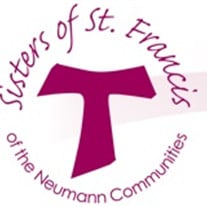 Sister Carmen Puhl, OSF, daughter of the late Joseph Nicholas and Stella Puhl and sister to the late Robert, Marguerite Puhl, Evelyn Keane, Sister Marie Estelle, OSF, Sister Leonard, OSF, and Sister Helene, OSF, went to her eternal home on March 4, 2017. Sister Carmen joined the Sisters of St. Francis of the Neumann Communities in 1939 after having been taught by the Franciscan Sisters, and having had three older siblings in the same community. Sister Carmen became a nurse early in her religious community life, ministering first at the former St. Francis Medical Center in Lawrenceville for 24 years and later on at St. Francis Hospital in New Castle, PA for 19 years. While serving at St. Francis Medical Center in Pittsburgh, she ministered as operating room supervisor, director of nursing service and eventually served as vice-president of the National Association of Operating Room Nurses. In New Castle, she became the nursing home administrator at Hill View Manor, Lawrence County Nursing Home, and in 1981 became a co-founder of Hospice of St. Francis with Dr. John Prioletti. In celebrating Sister Carmen's life, some of the words that were used to capture her spirit have been "empathetic, inspirational, dedicated to care of others, gracious, loving, and patient." These same words could be used to describe her as she retired from nursing and went on to offer her services at Mt. Alvernia Day Care and Learning Center where she joyfully rocked the tiny babies, providing much TLC. Sister Carmen leaves behind her sisters in community and her much loved nephew, Chris Keane and family and niece, Monica Sauk and family. Viewing will be Monday, March 6 at the Mt. Alvernia Regional House, 146 Hawthorne Rd., Pgh. PA 15209 at 1:00.p.m. - 7:30p.m. Funeral liturgy will be in the chapel at Mt. Alvernia on Tuesday, March 7, at 11:00a.m. Professional Services entrusted to the Care of D'ALESSANDRO FUNERAL HOME AND CREMATORY LTD., 4522 Butler St., Pgh, PA 15201 (Lawrenceville). In lieu of flowers, donations may be made to the Sisters of St. Francis Ministry, Formation or Retirement Fund. 146 Hawthorne Road, Pittsburgh, PA 15209.

The family of Sr. Carmen Puhl created this Life Tributes page to make it easy to share your memories.

Send flowers to the Puhl family.