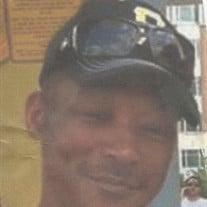 Charles W. Dudley "Mister" Age 58, peacefully passed away on Monday, April 10, 2017 at Excela Westmoreland Hospital, following an extensive battle with cancer. Born November 10, 1958, he was the son of the late Bobbi Jean Guest Dudley and Charles W. Dudley Sr. "Mister" was preceded in death by his maternal and paternal grandparents and by a son, Charles Dudley III. "Mister" graduated from Jeannette Sr. High School, class of 1975, was a member of the Jayhawk football team. He was employed by F C Meyer Packing. He enjoyed fishing, football, bowling, and going to Pittsburgh Pirate games. He relished his friends at Neighbors Tavern. Mister is survived by a daughter and son; Nesha and Desmond Dudley, both of Glen Dale, Arizona, three grandchildren, a sister, Tracee Dudley of Jeannette, PA, a brother Chris Dudley of Aurora, Colorado, numerous aunts, uncles, cousins, and a nephew. He will be dearly missed by his family and the numerous friends made over the years. The family would like to extend their gratitude to the dedicated and caring nurses, doctors, and the Excela Hospital Health Staff. A memorial service to honor the passing of "Mister" will be announced. Professional Services by D'Alessandro Funeral Home and Crematory Ltd., Lawrenceville

The family of Charles W. Dudley Jr. created this Life Tributes page to make it easy to share your memories.

Send flowers to the Dudley family.