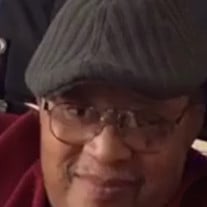 Clarence Davis, Jr. (age 77) of Pittsburgh, PA, passed away on Saturday, December 12, 2015. For 57 years, Clarence was the devoted husband of Maria A. Davis. He was the loving father of Elena DeLoof, Carlos Davis, Armand Davis, Sr. - who preceded him in death, Roland Davis, Carmen Davis, and Raquel Davis. Clarence was the grandfather of Martina Arambul, Tatiana Davis, Armand Davis, Jr., Renaya Lewis, Amber Davis-Poole, Andrew Davis, Armani Davis, Gabrielle Davis-Jones, Taylor Davis, and Ashton Davis and great-grandfather of Kadir Abdullah, Ariah Davis, Rayana Davis, Tae'Lynn Davis, Jason Davis, and Areion Davis. Clarence was the father-in-law of David DeLoof, Reva Cool-Davis, Carlos Arambul, Fehmi Abdullah, Pam Lewis-Davis, William Poole, and Sonia Ragin-Davis. He was uncle to Gary Davis, his only nephew. Killer (the disciplinarian and demanding father), Poppi (the doting grandfather), or Dave, as he was fondly known by family, friends, and coworkers, was also preceded in death by his parents, Theresa and Clarence Davis, Sr.; his stepmother, Helen Davis; and his sister, Phyllis Davis. Clarence was born in 1938, graduated from Fifth Avenue High School in 1955, and served In the United States Air Force from 1955-1960. He wed Maria (Encuentra-Onde) in 1959 in Zaragoza, Spain. After leaving the Air Force, he was employed by the U.S. Postal Service. He earned a Bachelor of Arts degree from the University of Pittsburgh in 1972, served as a teacher with the Pittsburgh Public Schools, and retired from the U.S. Office of Personnel Management in 1998. Clarence will be remembered as a man with a strong work ethic, a powerful sense of justice and equity, and a deep thirst for history, education, current events, and reading - traits passed on to his children. Clarence was also an avid Steelers, Pirates, and Pitt Panther's fan and sports enthusiast. The family would like to extend thanks and appreciation to the staff of the Pennsylvania State Veteran's Affairs Hospital in Pittsburgh for the care and attention they provided Clarence in his final years. We would also like to state our appreciation to all those friends, neighbors, acquaintances, and coworkers who in some fashion touched Clarence's long life. Arrangements trusted to D'Alessandro Funeral Home and Crematory Ltd. .

Clarence Davis, Jr. (age 77) of Pittsburgh, PA, passed away on Saturday, December 12, 2015. For 57 years, Clarence was the devoted husband of Maria A. Davis. He was the loving father of Elena DeLoof, Carlos Davis, Armand Davis, Sr. - who preceded... View Obituary & Service Information

The family of Clarence Davis, Jr. created this Life Tributes page to make it easy to share your memories.