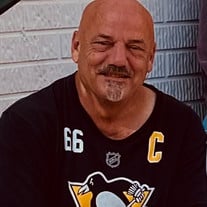 DAVID GLEN JOHNSTON 1959-2021 David G. Johnston passed away unexpectedly on September 23,2021 in Pittsburgh, PA at the age of 62. David will be remembered for his warmth, kind spirit and generous compassion for others, and his love of family. Although he didn't have a lot of material goods, he shared his time and energy with anyone in need. David was born to Marion (Northup) and James R. Johnston in Sewickley, PA to where he developed an abiding love for Pittsburgh. He was an avid fan of all the Pittsburgh sports teams, starting with the Pirates and his admiration for Roberto Clemente. David then lived in Carlisle PA where he was a member of the Second Presbyterian Church. Following his father's footsteps, he participated in scouting and camping and developed his love of nature - including a trip to Mexico to see the solar eclipse. He graduated from the College of Wooster where he found life-long friends. David moved to the Boston area where he lived for over a decade, making many friends. Throughout that decade, he rarely missed a weekend volunteering at his local church food bank. Before leaving Boston, David graduated from Tufts University with a Master's in Urban Planning and worked as a procurement specialist. In 1995, David returned to Pittsburgh where he continued this line of work for the county and the city and helped to raise his beloved twins, Martin and Emily. Of all the qualities that David possessed, what has impacted those around him the most are his positive attitude and friendly disposition. He was amicable and easy-going; he could strike up a conversation with anyone - from the bus driver on his route to his work colleagues to the regular customers at the local diner. David was known for his strong tennis game with impossible serves. He was competitive in pingpong and volleyball, where he would dive into a creek to retrieve a wayward ball, all to make people laugh. He loved to tease his four sisters and was a good storyteller always finding the humor in human predicaments. He had a fierce love of dogs - even though his dogs were never well trained. He loved bluegrass music and enjoyed his nieces and nephews. As a man of faith, he found his involvement with the East Liberty Presbytrian Church meaningful, serving as Deacon and volunteer. Because of his faith, he anticipated a happy reunion with his loved ones. He will be greatly missed. He is survived by his twin children Emily (Ryan) Provolt and Martin (Haley) Sasso, siblings Jennifer McKenna, Gail Viscome, Ann Johnston and Lucy Johnston-Walsh, 11 nieces and nephews and four great nieces and nephews. A small service will be held starting at 11:30 Monday September 27 (including a zoom link on the website at the funeral home - D'Alessandro, 4522 Butler St., Pittsburgh PA) and another service later in the fall in Carlisle at Second Presbyterian Church. Zoom Info: Topic: Johnston Funeral Time: Sep 27, 2021 11:30 AM Eastern Time (US and Canada) Join Zoom Meeting https://us02web.zoom.us/j/81615841927 Meeting ID: 816 1584 1927 Find your local number: https://us02web.zoom.us/u/kWmYUBgDH

DAVID GLEN JOHNSTON 1959-2021 David G. Johnston passed away unexpectedly on September 23,2021 in Pittsburgh, PA at the age of 62. David will be remembered for his warmth, kind spirit and generous compassion for others, and his love of family.... View Obituary & Service Information

The family of David Glen Johnston created this Life Tributes page to make it easy to share your memories.

Send flowers to the Johnston family.