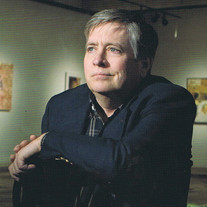 DOUGLAS FERRARI, age 64, originally from East Keansburg (now Middletown), New Jersey, passed away August 7, 2017. He was preceded in death by his parents Muriel and Edward Ferrari, brother Edward and sister Barbara, all of East Keansburg, NJ. Since April 2017, Douglas had been living in Pittsburgh, Pennsylvania. Left to cherish his memory are his sister Nancy of Pittsburgh, brother Gordon Ferrari and his partner Scott Parker of San Diego, CA, sister Mary Beth Garrett of Keyport, NJ, sister Francine Ferrari of Middletown, NJ, his aunt June Cahill, as well as nieces, nephews, cousins, friends, and beloved cat Butchie. A sculptor and teacher, Douglas was a Founder and - from 2004 to 2013 - served as Executive Director of the Shore Institute of the Contemporary Arts (SICA), located in Long Branch, NJ and (since 2011) in Asbury Park, NJ. From 2012 to 2017 he served as Assistant Director of the Arts Guild of New Jersey, and as President of the Board of Trustees of the public access Asbury Park TV. Douglas' educational accomplishments include: Bachelor of Arts degree at Rutgers University; Masters degree in Visual Arts at Montclair State College; Master of Fine Arts degree at Brooklyn College; and Doctor of Letters in Contemporary Issues (ABD) at Drew University. A memorial service for Douglas will be held on Saturday, Oct. 28, at the CVA Gallery, Brookdale Community College, 765 Newman Springs Road, Lincroft, NJ 07738, at 2 PM. The family suggests memorial contributions be made to a local art center or to a local no-kill animal shelter of your choice. Memorial contributions may also be made to Pittsburgh Center for the Arts, Attn: Development, 477 Melwood Ave., Pittsburgh, PA 15213. If you make a memorial contribution, request that an acknowledgement be sent to [email protected] . For more information, see .

The family of Douglas J. Ferrari created this Life Tributes page to make it easy to share your memories.

Send flowers to the Ferrari family.