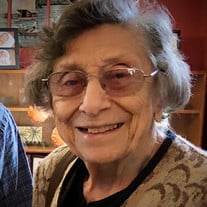 Emma DeBenedetti Age 98, of Point Breeze, Pittsburgh, and Sarasota, Florida, passed away peacefully on Wednesday, June 3, 2020. Emma was born on March 5, 1922 in Turin, Italy, daughter of Riccardo and Olimpia Falco, and sister to Eugenio and Enzo Falco. Emma grew up in Turin, enjoying hiking and skiing in the nearby Alps. In 1938 she emigrated from Italy as a result of anti-Semitic laws immediately preceding World War II. She briefly stayed at a boarding school in Switzerland, then in Paris with her family, and then in New York City. In New York she met her future husband, Sergio DeBenedetti, a physicist who had also emigrated from Italy as a result of anti-Semitic laws. Her married life began with moves from city to city as Sergio pursued his academic career. Her children, Lydia, Vera and Gilbert were born, respectively, in Dayton OH, Oak Ridge TN, and Pittsburgh. Upon finally arriving in Pittsburgh, where Sergio had obtained a position at Carnegie Mellon University (then Carnegie Institute of Technology), the family was further augmented by Sergio's mother, Amelia and Emma's brother Enzo who was a student at Carnegie Tech. Emma dealt with this sudden influx to her family graciously. Emma lived out the rest of her life in Point Breeze, as her children grew up and eventually left home. After his retirement from Carnegie Mellon, Sergio and she bought a condo in Sarasota and spent many happy years together there until Sergio's death in 1994. Emma is survived by her brother Enzo Falco of Belmont, MA; three children, Lydia Moran of Portola Valley, CA; Vera Bonnet of Indiana, PA and Gilbert DeBenedetti of Squirrel Hill; six grandchildren, Anna Anderson, Abraham DeBenedetti, Sera Moran, Jenya DeBenedetti, Ian Bonnet, and Yvette Bonnet; and eight great-grandchildren. Funeral arrangements trusted to D'ALESSANDRO FUNERAL HOMEand CREMATORY LTD., Lawrenceville. In lieu of flowers donations can be made to GlobalPittsburgh at www.globalpittsburgh.org or at 305 34th Street, Pittsburgh, PA 15201. www.dalessandroltd.com.

Emma DeBenedetti Age 98, of Point Breeze, Pittsburgh, and Sarasota, Florida, passed away peacefully on Wednesday, June 3, 2020. Emma was born on March 5, 1922 in Turin, Italy, daughter of Riccardo and Olimpia Falco, and sister to Eugenio and... View Obituary & Service Information

The family of Emma DeBenedetti created this Life Tributes page to make it easy to share your memories.

Send flowers to the DeBenedetti family.