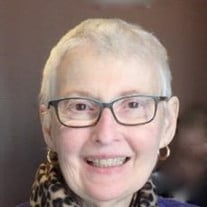 EVELYN (HOERING) GOLEMBE Evelyn (Hoering) Golembe, resident of Regent Square in Pittsburgh, PA since 2013, passed away on July 19, 2019 after a courageous and stubborn three-year battle against leiomyosarcoma, a rare form of cancer. Born June 26, 1941 in New York City, she was the daughter of the late Otto and Helena (Goettel) Hoering who had emigrated from the Germany's Rhineland Palatinate in the 1930s. Her hard-working family owned and operated the popular Lake Jefferson Hotel in Jeffersonville, NY from the late 1940s until the 1970s. Beloved wife of John C. Golembe, Evelyn was the proud mother of Ellen J. Rubin (Jonathan) of Pittsburgh and Peter A. Golembe (Regine) of Muelheim/Ruhr, Germany, and the delighted grandmother of Evan J. Rubin, Julian E. Rubin, Jasmine A. Golembe and Benjamin C. Golembe. She is also survived by her brothers Rudolf Hoering (Helen) and Kenneth Hoering (Cherie) and many nieces, nephews and cousins. With lifelong curiosity for the culture and language of her family's heritage, Evelyn earned her B.A. and M.A. degrees in German language and literature at Wayne State University. She additionally studied at William Smith College, the University of Munich and the University of Maryland. As a young person Evelyn worked in the family hotel before beginning her own professional life as a German language instructor at Wayne State, then as a high school English teacher and librarian on the island of Guam and as a tenured German teacher in Prince George's County, MD schools. When her husband accepted an assignment with the University of Maryland's European Division, she seized the opportunity to pursue a rewarding career overseas. For 20 years she served in Heidelberg, Germany as translator and civilian executive officer for the U.S. Army Medical Research Unit-Europe, a Special Foreign Activity of the Walter Reed Army Institute of Research. Evelyn thoroughly enjoyed living in Europe, made many friends there, volunteered as an officer for the Women's International Group and traveled widely. She and John were members of the Heidelberg Wandering Club and together they hiked a different trail nearly every weekend, usually in Germany or France but also in England, Ireland, the Netherlands and Luxembourg. But throughout her varied and exciting life, Evelyn's primary loyalty and love was always for her family. She and her husband made plans to celebrate their 54 years of marriage in October. A memorial service will be held for Evelyn in the spring, her favorite season. In lieu of flowers it is suggested that donations be made in Evelyn's memory to: AHN West Penn Hospital Cancer Institute, Patient Care Fund, 4818 Liberty Avenue, Pittsburgh, PA 15224. www.supportahn.org. Professional services trusted to D'ALESSANDRO FUNERAL HOME and CREMATORY LTD., Lawrenceville. www.dalessandroltd.com.

The family of Evelyn Hoering Golembe created this Life Tributes page to make it easy to share your memories.

Send flowers to the Golembe family.