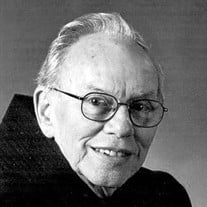 Father Regis Schlick, O.F.M. Cap., died on April 12, 2016, at UPMC Shadyside in Pittsburgh. He was 84. Born in Wheeling, WV, to Joseph and Catherine (Lynch) on July 1, 1931, he was baptized at St. Alphonsus Church and given the name Edward. He attended St. Mary Catholic Elementary School and Central Catholic, both in Wheeling. Father Regis was preceded in death by his parents, his brothers Martin and Bernard, and his sisters Dolores Travis and Virginia Nesbitt. He is survived by several nephews. After graduation from high school Edward was employed as a textile purchaser until he joined the United States Army in 1952. He was honorably discharged two years later. He was a proud veteran and member of the American Legion. Shortly after military service he entered St. Fidelis Seminary in Herman, PA. On July 13, 1958, he was invested with the Capuchin habit and took his religious name, Regis. One year later, he professed his first vows as a Capuchin friar. On July 14, 1962, he made his perpetual profession of vows. He was ordained to the priesthood on February 13, 1965, in the National Shrine of the Immaculate Conception in Washington, DC. Several months later he completed his theological studies, after which he was assigned to the mission of Puerto Rico, where he labored for 31 years. Father Regis' first assignment was in Ponce, PR, at Santa Teresita Parish. In 1969 he was transferred to Adjuntas, where he served at San Joaquin Parish. He was the Guardian of the local community of friars for three years, and in 1975 he was elected to the leadership council of the Puerto Rico Vice-Province of Capuchin friars. In 1978 Father Regis was assigned to Rio Piedras, PR, and San Antonio Parish, where he served in numerous capacities for the next eighteen years. From 1978 until 1984 he was parochial vicar of the parish, followed by a term as pastor until 1993. He was also spiritual assistant to the Order of Secular Franciscans, chaplain for San Antonio School, as well as chaplain to the Barrio Buen Consejo Chapel and Leopold Figuero Residence. In 1996 he left Puerto Rico and took a sabbatical at St. Ambrose Parish in Cresaptown, MD. A year later Father Regis was named pastor of two parishes in West Virginia: Sacred Heart Church in Point Pleasant and St. Joseph Church in Mason. He remained at that post until 2008, when declining health led to his retirement. In June 2008 he took up residence at St. Augustine Friary in Pittsburgh, PA. He served as confessor for the Sisters of St. Francis at Mt. Alvernia in Milvale and celebrated the Sunday Mass at Vincentian de Marillac Nursing Home in Pittsburgh. Father Regis will be remembered for his affectionate personal and pastoral style, love of West Virginia and Puerto Rico, and pride in his military service. He became a resident of Vincentian Home in Pittsburgh in March 2016. Father Regis was admitted to UPMC Shadyside on April 11, where he passed away the following day. His body will be received at St. Augustine Friary (221 - 36th Street) on Friday, April 15, with visitation in the chapel from 2PM to 4PM and 7PM to 9PM. The wake will be at 8PM. The Mass of Christian Burial will be celebrated at Our Lady of the Angels Church (225 - 37th Street) on Saturday, April 16, at 10AM. Burial will be in the Friars' Plot of Mt. Calvary Cemetery in Wheeling at 1:30PM. Donations in honor of Father Regis may be made to the Capuchin Friars, 220 - 37th Street, Pittsburgh, PA, 15201. Arrangements trusted to D'Alessandro Funeral Home and Crematory Ltd., Lawrenceville.

Father Regis Schlick, O.F.M. Cap., died on April 12, 2016, at UPMC Shadyside in Pittsburgh. He was 84. Born in Wheeling, WV, to Joseph and Catherine (Lynch) on July 1, 1931, he was baptized at St. Alphonsus Church and given the name Edward.... View Obituary & Service Information

The family of Father Regis AKA Edward Schlick created this Life Tributes page to make it easy to share your memories.

Send flowers to the Schlick family.