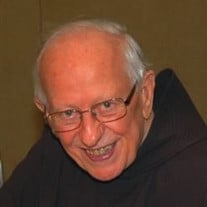 Fr. Bonaventure Stefun, O.F.M. Cap., died on March 4, 2017 in Pittsburgh. He was 88. He was born in New Kensington, PA, on September 22, 1928, to John and Anna (Kovolik). Given the name Joseph at his baptism, he was one of nine children and the last surviving sibling. Preceding him in death were his sisters: Anna Stefun, Barbara Stanley, Mary Schuler and Elizabeth Reedy; and brothers Andrew, John, George and Raymond. Numerous nephews and nieces, mourn his passing. Among them is his nephew and fellow Capuchin, Father Emett Schuler, of Washington, DC. After completing his primary education at St. Joseph Catholic School in New Kensington, he enrolled at St. Fidelis Seminary in 1944. He was given the name Bonaventure when he was invested in the Capuchin habit in 1950, professing his first vows as a Capuchin friar on July 14, 1951. Father Bonaventure was ordained to the priesthood on June 9, 1956, at the National Shrine of the Immaculate Conception in Washington, DC. He subsequently finished theological studies and took classes in journalism and public speaking at the Catholic University of America. In 1958 he attended Carnegie Tech in Pittsburgh for more studies in journalism. With his academic background in journalism, he founded and produced Capuchin Challenge, a periodical featuring aspects of Capuchin life and ministry in the Province of St. Augustine and its missions in Puerto Rico and Papua New Guinea. He was editor of the publication from 1960 to 1970. From 1971 to 1977 he was pastor of St. Joseph Parish in Dover, OH. He then was appointed spiritual assistant to the Order of Secular Franciscans and embarked on a career of preaching. Father Bonaventure was in great demand as a director of retreats and recollections days. From 1990 to 2001 he was a co-chaplain at St. Francis Medical Center in Pittsburgh. In semi-retirement, Father resumed preaching ministry and provided sacramental assistance at various parishes in the dioceses of Pittsburgh and Greensburg. From 2005 to 2009 he was assigned to St. Clare of Assisi Parish in Clairton as part-time and senior priest. In 2009 Father Bonaventure moved to St. Augustine Friary, where he remained until moving to Vincentian Home in late 2016. Father Bonaventure was a prolific reader and author. Until his sight failed in the latter months of his life, he avidly read books across a wide spectrum of interests. He wrote thousands of poems and shared them generously. Father was always ready to lend an editing hand for publications of all sorts. He had a great respect for the written word. He also was blessed with many devoted and helpful friends. Father Bonaventure's interest in psychology and the spiritual life led many to seek him out for spiritual guidance. He loved being in the company of his friends, who were always ready to attend to his needs. Father had confidence in his opinions and was rarely reluctant to share them widely. His body will be received at St. Augustine Friary (221 36th Street, Pittsburgh, PA), with visitation on Tuesday, March 7, 2017 in the friary chapel from 2PM to 4PM and 7PM to 9PM. The Prayer Vigil will be at 8PM. The Mass of Christian Burial will be Wed. at 11:00 AM in St. Augustine Church in Pittsburgh. Burial will follow immediately in the Friars' Plot of St. Augustine Cemetery. Donations in honor of Father Bonaventure may be made to the Capuchin Friars, 220 37th Street, Pittsburgh, PA, 15201. Professional Services entrusted to the Care of D'ALESSANDRO FUNERAL HOME AND CREMATORY LTD., 4522 Butler St., Pgh, PA 15201 (Lawrenceville). www.dalessandroltd.com

The family of Fr. Bonaventure Stefun created this Life Tributes page to make it easy to share your memories.

Send flowers to the Stefun family.