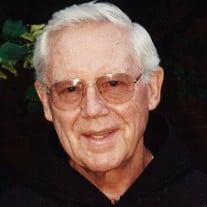 Fr. DeSales Young, OFM Cap. Died on May 2, 2017, at Vincentian de Marillac in Pittsburgh. He was 96. He was born in Cumberland, MD, on July 15th, 1920 to Arthur and Lenora (Lippold) Young. Named Arthur Francis, Jr. at his baptism, he was one of five children. Preceding him in death are his brother, Fr. Valentine Young, OFM Cap., and sister, Ann McKenzie. He is survived by his brother, Paul; sisters Helene Teeter and Lenore ("Paulie") Taylor and her husband, Cass; and numerous nieces and nephews whose baptisms and weddings he delighted in celebrating. He was educated at Ss. Peter and Paul grade school and LaSalle High School in Cumberland before entering St. Fidelis Seminary of the Province of St. Augustine of the Capuchin Order in 1934. He was given the name DeSales upon his investiture with the Capuchin habit in July 13, 1941. Upon completion of his Theology studies at Capuchin College, Father DeSales was ordained to the priesthood on June 8, 1948 at the National Shrine of the Immaculate Conception in Washington, DC. Following his initial assignment as assistant pastor at St. Augustine parish in Pittsburgh, Father DeSales spent the next 17 years preaching with the Capuchin Mission Band, being stationed in Pittsburgh, St. Louis, MO, and Annapolis, MD, while conducting retreats and parish missions. In 1968 he was assigned for the first of two tours as the pastor of St. Ambrose parish in Cresaptown, MD, near his hometown of Cumberland, where he served for three years. "It was time to get off the road," Father DeSales said, noting the hectic work of a mission priest that had kept him moving from parish to parish for nearly two decades. In June, 1971, Father DeSales was sent to Sacred Heart parish in Charleston, WV where he served for the next six years as local superior and pastor. From 1977 until 1983 he was pastor of St. Mary parish in Herman, PA. His years in Charleston and Herman were marked by a notable increase in the enrollment in each of the parish grade schools, a tribute to Father DeSales enthusiasm for Catholic education, and one which he communicated effectively to his parishioners. He was subsequently assigned to York, PA, to serve as local superior and pastor of St. Joseph parish there. He spent the next six years in this rapidly growing parish, continuing to foster support for parochial education at the elementary and junior high school levels. In 1988 he returned once again to the friary in Cumberland, and to St. Ambrose parish as its pastor, an assignment that delighted him. He focused his commitment to Catholic education there on the parish Religious Education program where, once again, he was able to employ creative means to garner support and energy from the parish and staff. In 1995, Father DeSales returned to Pittsburgh, where he would spend the remainder of his active ministry as Chaplain to the Sisters of Saint Francis of Mt. Alvernia (1995-2002), as a pastoral assistant and confessor at St. Mary of the Point in Pittsburgh (2002-2007), and as a part-time Chaplain to the Vincentian Sisters. In December of 2016, Father took up residence at Vincentian de Marillac, where he was able to spend the final months of his life under the wonderful care of the Sisters there, in peace and relative comfort after his long years of priestly service to the Church. Viewing for Father DeSales will be from 2-4 PM on Friday, May 5th at St. Augustine Friary, 221 36th Street, Pittsburgh, PA 15201. There will be a wake service at 4 PM. The body will then be transferred to Cumberland, MD. Viewing in Cumberland will be from 9-11 AM on Saturday, May 6th, at the Shrine of Ss. Peter and Paul, 125 Fayette Street, Cumberland, MD, followed by the funeral Mass at 11 AM. Interment will be in the friars' plot at Ss. Peter and Paul cemetery immediately following the Mass. Professional Services by D'Alessandro Funeral Home and Crematory Ltd., Lawrenceville. Donations in honor of Father DeSales may be made to the Capuchin Friars, 220 37th Street, Pittsburgh, PA 15201. www.dalessandroltd.com

Fr. DeSales Young, OFM Cap. Died on May 2, 2017, at Vincentian de Marillac in Pittsburgh. He was 96. He was born in Cumberland, MD, on July 15th, 1920 to Arthur and Lenora (Lippold) Young. Named Arthur Francis, Jr. at his baptism, he was one... View Obituary & Service Information

The family of Fr. DeSales Young, OFM Cap created this Life Tributes page to make it easy to share your memories.