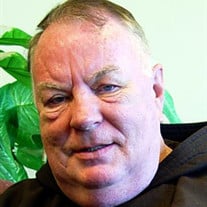 Father Dismas Young, OFM Cap., died peacefully in his sleep on Thursday morning, December 17th, at Vincentian Home in McCandless, PA. He was 82 years of age, living 59 years as a Capuchin friar and 54 years as a priest. He was born in Butler, PA to his parents Eugene and Mary (Steinhiser) Young and given the name Leo at his baptism. He was one of four children born to the couple and was preceded in death by his parents, his brother Eugene and sister Nancy (McKain). He is survived by his sister Alice (Bernard) Carbin. Young Leo was educated at St. Paul Parish School and Butler High School before entering candidacy at the Capuchin Brothers Training Center in Cumberland. While there he felt called to ordained ministry and enrolled at St. Fidelis College and Seminary in Herman in 1958. Following his second year of studies he was invested at the Capuchin Novitiate in Annapolis, MD where he received the religious name "Dismas", making his profession of vows in 1961. He completed his college degree and studied Theology at Capuchin College in Washington, DC prior to being ordained a priest in 1966. Having completed his formal studies, Father Dismas was assigned to ministry in the Vice Province mission of Puerto Rico, where he worked happily for eight years in Rio Piedras and Utuado before returning to the mainland in 1975. He struggled a bit to find his niche after returning to the province, serving variously in Pittsburgh, Hays, KS, Charleston, WV and Herman, PA before landing in Rochester, PA where things smoothed out for him. He enjoyed nine years there from 1978 through 1987 as Parochial Vicar of St. Cecilia Parish prior to a Jubilee sabbatical that provided him much desired theological and pastoral renewal. When the Province of St. Augustine moved its Novitiate from Annapolis to Allison Park, PA in 1984, the novices found in Father Dismas a staunch support and encouragement for their vocations, as well, at times, as some much-needed comic relief. A smile betraying both warmth and mischief, his deadpan sense of humor and dry wit were a welcome change of pace for young men living in relative isolation from their former activities. The Parish Gift Shop at St. Cecilia, affectionately nicknamed "DizMart" by the novices, became the stuff of legend both for its surprising-if-modest profitability and its novel marketing strategies (how many times can you sell a re-gifted donation?) Throughout his days Father Dismas remained an appreciated advocate of all the men in Capuchin formation, from college students to friars preparing for final vows. There is no doubt that the depth of Father Dismas' Capuchin heart was most manifested in his fourteen years serving as pastor of Saint Mary Parish in Export, PA. Beyond becoming a beloved pastor, his ability to welcome and care for his brother friars of particular need earned the support and gratitude of several Provincial Ministers. His compassionate and enterprising spirit was also recognized in the Export community where he was chosen Citizen of the Year for his contributions to the local community in 1990. When asked by the Province to take on pastoral duties at St. Anthony Parish in Charleston, WV in 2002, Father Dismas generously accepted the assignment even though it meant leaving his beloved community in Export. He served there for five years, until 2007, when health issues started to become a limiting reality in his life. He stayed in West Virginia, residing at Paul VI Pastoral Center in Wheeling to support the fraternal life of the friars on staff there as well as those at the adjoining St. Joseph of Leonissa Hermitage, taking on priestly ministry in the surrounding areas as much as he was able to given his diminishing health. In 2012 he returned to Pittsburgh at St. Augustine friary in order to attend to his increasing medical concerns. From November, 2019 until his death, he had been ably and lovingly cared for by the staff of Vincentian Home in McCandless township. The Capuchin friars will receive his body at St. Augustine friary on Monday, December 21st. Visitation and viewing will be held from 7-8 PM on Monday evening, with a Vigil Service conducted at 8 PM. The Mass of Christian Burial for Father Dismas will be celebrated at Saint Augustine Church in Lawrenceville on Tuesday, December 22nd at 10 AM with interment following in the friars' plot of St. Augustine Cemetery. Due to Covid concerns there will be no luncheon following the services. Donations in memory of Father Dismas may be made to the Capuchin Friars, 220 37th Street, Pittsburgh, PA 15201

Father Dismas Young, OFM Cap., died peacefully in his sleep on Thursday morning, December 17th, at Vincentian Home in McCandless, PA. He was 82 years of age, living 59 years as a Capuchin friar and 54 years as a priest. He was born in Butler,... View Obituary & Service Information

The family of Fr. Dismas Young, OFM Cap. created this Life Tributes page to make it easy to share your memories.