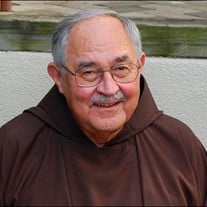 Father Louis J. Petruha, OFM Cap. Father Louis Petruha, OFM Cap., died on Sunday, March 31, 2019 at UPMC Shadyside Hospital in Pittsburgh following an extended illness, surrounded by his Capuchin brothers, family and friends. He was 80 years of age, living nearly 59 years as a Capuchin Friar and 54 years as a priest. He was preceded in death by his parents John Petruha and Anna Louise (Fesco) Petruha and is survived by his sisters Pauline (Dec. Leo) Zelina and Genevieve (Dec. Edward) Klos; he was the uncle of Elizabeth (Wayne) Sadowski, Paulette (Jude) Sadowski, Anthony "Tony" P. Zelina, Mary (Tom) Blose, Monica Klos and the late Marguerite (John) Mazurana; great uncle of eleven and great-great uncle of nineteen. Born John Paul Petruha on February 20, 1939, he was baptized at St. Mary of the Assumption parish on 57th Street and grew up in the Stanton Heights neighborhood of Pittsburgh. He attended the parish elementary school there before entering St. Fidelis College and Seminary in Herman, PA in 1953. At the end of his sophomore year in college, John entered the Capuchin novitiate in 1959 where he received Louis as his religious name, professing his first vows on July 14, 1960. Frater Louis then returned to the college seminary in Herman where he received his BA in Philosophy, graduating in 1962 before professing his final vows in 1963 while studying theology at Capuchin College in Washington, DC. He was ordained to the priesthood in the chapel of St. Fidelis on October 24, 1965. He completed his Master's Degree in Religious Education at Capuchin College the following year. Even though his formal education was completed in 1966 Father Louis possessed an aggressive intellect. Concerned to keep himself updated in matters of the Church and the world, he attended dozens of courses, workshops, pilgrimages, tours and mission trips throughout the span of his priestly life. Father Louis loved being a priest. His abiding passion for parish ministry was reflected back to him through the affection and commitment of his parishioners. With the exception of a single year serving as an instructor at the Capuchin Novitiate in Annapolis, MD (1966-67) and five years forming future Capuchin priests and brothers at Capuchin College as Spiritual Director and then Guardian (1975-80), Father Louis spent his entire priestly life in parish work, serving first as an associate pastor at St. Joseph parish in Dover, OH (1967-1972) and then at SS. Peter and Paul parish in Cumberland, MD (1972-1975). After working in formation at Capuchin College, Father Louis spent the next two decades as a pastor, first of St. Augustine parish in Pittsburgh (1980-1989) and then of St. Joseph parish in Cabot, PA (1989-2000). After taking a sabbatical in celebration of the 25th Anniversary of his ordination, Father Louis returned to pastoral work at St. Joseph parish in York, PA, shepherding the community there from 2001 through 2015. As his health began to fail during his last years in York he recognized the need to step back from roles of leadership in which he had so heavily invested himself for so many years, accepting the position of Senior Priest at Our Lady of the Mountains parish in Cumberland, MD, where he continued to his priestly ministry until his medical conditions intervened in recent months. As much as Father Louis treasured his priesthood, he treasured even more his vocation as a Capuchin friar. His identity as a Capuchin shaped his ministry as a priest. His service grew out of a deep, rich spiritual life and a genuine fraternal concern for the people of his parish as well as his own Capuchin brothers. He considered spiritual formation a lifelong process and sought to instill that understanding in all those he lived and worked with. He was remarkable in his faithfulness to prayer and his love of Sacred Scripture. Father Louis was a singularly thoughtful man, both in compassion and deliberation. His ability to connect with those who were sick, suffering or struggling was a trademark of his pastoral style. His concerns for the details of Capuchin life and work, often expressed in long, well-developed letters of opinion, were never ignored. He enjoyed his reputation as a "blue collar, shot-and-beer" personality, affable and comfortable in almost any situation. He saw himself as an average, down-to-earth man who had been abundantly blessed by the God whom he served so devotedly. His body will be received at Saint Augustine Church of Our Lady of the Angels Parish, 225 37th Street, Pittsburgh on Friday, April 5th, 2019 with visitation from 2 to 4 PM and 6 to 8 PM. The Vigil for the Deceased will begin at 8 PM. The Mass of Christian Burial will be celebrated at Saint Augustine Church in Lawrenceville on Saturday, April 6th, 2019 at 10 AM with interment following in the friars' plot of St. Augustine Cemetery. Donations in memory of Father Louis may be made to the Capuchin Friars, 220 37th Street, Pittsburgh, PA 15201

The family of Fr. Louis J. Petruha, OFM Cap. created this Life Tributes page to make it easy to share your memories.