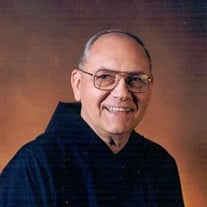 Father Vernon Busch, OFM Cap. Father Vernon Busch, OFM Cap., died suddenly at about 6:30 AM on Saturday, April 18th just outside the chapel of St. Augustine Friary in Pittsburgh, PA. He was 85 years old, having been a Capuchin Franciscan friar for nearly 65 years and a priest for almost 60 years. Father Vernon was a much respected man among his Capuchin brothers who elected him three times to serve as a member of the Provincial Council. His intelligence, wisdom and well-grounded good sense were highly valued. His straightforward manner could be disarming, but his sense of humor was never far below the surface. These traits in particularly made him a trusted friend and counselor to young and old alike. Born Robert on October 16, 1934, he was preceded in death by his father Andrew (+1982), his mother Josephine (Froehlich, +1994), and his brother Charles (+2016). He is survived by two sisters: Joan (Moineau) and Mildred (Thurber), both of Lower Burrell, PA. A nephew, Fr. John Moineau, is a priest of the Greensburg diocese. Following his parochial elementary school education young Robert attended St. Fidelis High School and College in Herman, PA, receiving the name "Vernon" upon entering the Capuchin Novitiate in 1954. He made his religious profession of vows on July 14, 1955. Upon completion of his undergraduate studies in 1957, Father Vernon began his theological seminary training at Capuchin College in Washington, DC and was ordained a priest on June 6, 1960. He spent his first seventeen years of ministry in education, teaching at St. Fidelis College and High School and also serving as Prefect of Discipline and Dean of Students. He continued his own education as well, earning an M.A. in classical languages from Duquesne University in 1966. During these years he also served briefly as a chaplain for the Veteran's hospital in Butler, PA and was for three years the pastor at St. Joseph Parish in North Oakland. Father Vernon left education ministry late in 1979, serving briefly as pastor of St. Alphonsus parish in Wheeling, WV before returning to the Pittsburgh area upon his election to Provincial Administration. He was also assigned as Guardian (local superior) of the friars' community of St. Augustine in Lawrenceville. In 1983 he was asked to be part of the team of friars that opened the newly re-established St. Conrad friary in Allison Park as the Provincial Novitiate. He would spend the next thirteen years of his life there as a Chaplain to the Kane Regional Center ministering to the elderly and infirm and as confidant and confessor the young men discerning their vocation as Capuchin friars. Father Vernon returned to parish ministry in 1996, moving to Cumberland, MD, where he served Ss. Peter and Paul parish until 2004, when health concerns overtook him and brought him back to St. Augustine friary in Lawrenceville. The last fifteen years of Father Vernon's life were spent battling severe health problems. These were years of suffering for him, borne with determination, humility and faith. He did not feign toughness; he was resolute and honest about the challenges he faced and surrendered himself to a continuous ministry of prayer, entrusting himself and others, especially the sick and suffering, to God's providence. To the end he was fully present to others; he always enjoyed good conversation and good company. His funeral arrangements will remain private due to the current pandemic scourge. The Capuchin friars of St. Augustine Friary will receive his body on Monday evening, April 20th and will keep vigil for him there. The funeral Mass will be celebrated at 8:30 Tuesday morning in the friary's St. Margaret of Cortona chapel. Interment will be held privately at St. Augustine cemetery. Donations in memory of Father Vernon may be made to: The Capuchin Education Fund Province of Saint Augustine 220 37th Street Pittsburgh, PA 15201 Professional services trusted to D'ALESSANDRO FUNERAL HOME and CREMATORY LTD., Lawrenceville.

The family of Fr. Vernon Busch created this Life Tributes page to make it easy to share your memories.