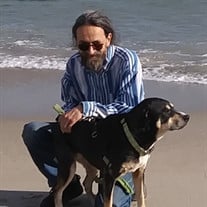 Francis P. "Frank" Carr Age 62, departed this life on December 13, 2021, in Pittsburgh, PA, surrounded by love. Frank was like a cat with many lives - Frank the teacher and theater artist, Frank the husband and father. Frank the revolutionary, the sports fan, the street hockey player, the handyman and the chef. Frank who beat-the-odds, Frank eternally young, Frank the Pittsburgher, Frank the New Yorker. Frank the musician, the reader, the poet, the dreamer. Frank who knew to watch the sunrise and sunset with awe. Complications following cardiac surgery took his last life, but in memory and love he lives on. Born in 1959 in Pittsburgh, he was a son of the late William Carr and Margaret Lipinski Carr. They named him Francis for the patron saint of nature and animals, and the name would ring true. He was passionate about equity and respect for people, animals, and the planet, working as an advocate and fundraiser for environmental causes. He never met a dog he didn't like. Music was a constant throughout his life. Siblings remember how, as a boy, he was inspired by music on the radio to learn to play the mandolin. His brothers inspired him to play the guitar. On guitar and electric bass he played in bands in Pittsburgh and New York City, including The Evidence, Science Fiction, Wall of Wreefer, Blue Wallet, and Folk You. His guitar heroes were George Harrison and Neil Young. An award-winning poet, he wrote songs about justice and love. Known for his sharp wit, intelligence, kindness, and humor, his vivid imagination was nurtured in youth by Gene Roddenberry and J.R.R. Tolkien. He dressed up as Gandalf at Halloween, even as an adult. His love of travel took him far: He traveled across the country camping with his soulmate Viv. Together they saw Halley's Comet from Cusco. On the same journey he fulfilled his dream of going to the Galapagos Islands. In Paris as a delegate to an international Green Party convention he visited Notre Dame. Frank remained loyal to Pittsburgh sports teams, win or lose, even when he lived in Brooklyn, NY. He was as much a fan of the stars in the broadcast booths as he was of the stars on the ice or the field. His childhood hero was Roberto Clemente, and his broadcast hero was Mike Lange. As a Penguins fan and a fan of the game, he enjoyed seeing the talent that came into the league on any team. He delighted in sports talk with his son Woody, the best beer-and-a-game buddy a father could have. He was a graduate of Montour High School and the University of Pittsburgh. He attended graduate school at Columbia University, where he left his studies to become a full time Dad. As teacher of History and English at McKee Place School, he is remembered as mellow, kind, and accepting. A man of strongly held political beliefs, Frank was able to reach across the echo chambers to earn the respect of people who disagreed with his views. He was active in political efforts for criminal justice system reform and to end mandatory sentencing laws in New York. He served as editor of the progressive newspapers New People and G. He found joy in reconnecting with former students who became close friends, and with dear neighbors in Brooklyn. He found happiness sitting with friends and family around a fire, fun in backyard barbecues, and fulfillment in making music anywhere. He found satisfaction in getting the lawn mowed and the dishes all washed, and in successfully fixing a leaky pipe. He enjoyed planting and tending his garden in the hot humid days of the growing season. He appreciated quality in craft beer. He found hope in a project to restore Pennsylvania mined lands in the Chesapeake Bay Watershed. A loving and beloved husband, proud father, caring brother, and good friend, Frank is survived by his wife, Vivienne Shaffer; his son, Woody Shaffer-Carr; brothers Bill (Jean Ragozzino) and Mark (Kim Perez); sister Peggy Smith (Ken); and by dozens of cousins and many dear friends. Cocoa and Leo search the house for him with quiet barks and meows. In Frank's memory glasses of beer will be raised on January 5, at East End Brewing Company, on Julius St., during their regular open hours of 5 to 10pm. Frank was a patron, supporter, and champion since the brewery first opened in his neighborhood. Bells will be rung on January 6, 7:30pm, at Southminster Presbyterian Church in Mt. Lebanon. Trees will be planted and tended in late April, 2022, in Westinghouse Park. For more information about memorial gatherings please contact [email protected] . In the many small actions of every day, we honor Frank's memory when we walk the dog, pet a cat, help a neighbor, yield right-of-way to a bicycle, plant a tree, tend the garden, speak out for justice, bake a pie, feed the birds. Professional Services trusted to D'ALESSANDRO FUNERAL HOME and CREMATORY LTD., Lawrenceville. www.dalessandroltd.com

Francis P. "Frank" Carr Age 62, departed this life on December 13, 2021, in Pittsburgh, PA, surrounded by love. Frank was like a cat with many lives - Frank the teacher and theater artist, Frank the husband and father. Frank the revolutionary,... View Obituary & Service Information

The family of Francis P. Carr created this Life Tributes page to make it easy to share your memories.

Age 62, departed this life on December...

Send flowers to the Carr family.