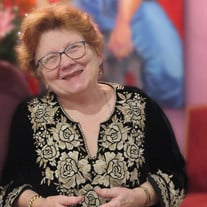 Gina Pierce Clapp was born on June 11, 1945 in McKeesport, PA, to Anlaug H. Pierce and Chandler P. Pierce. She graduated from Elizabeth Forward High School, and then Boston University, where she earned a BA in political science. A few years later, she earned a master's in public administration from Syracuse University. When Gina was 11, she traveled by ship to Norway with her grandmother, Marta Hendricksen. During that summer, she learned Norwegian, spent time with many generations of relatives, and developed a lifelong love for the people, culture, and landscape of Norway. As a young girl, Gina traveled from McKeesport to the Oakland neighborhood in Pittsburgh-usually the only child among a streetcar full of steelworkers-where she took Tam O'Shanter art classes at what is now the Carnegie Museum of Art. (She was preceded in this program by notable Pittsburgh artists Andy Warhol and Philip Pearlstein.) At Syracuse University, she met Allen (Gene) Clapp, a fellow graduate student who had lived for three years in Norway during high school, and revealed traditional Norwegian woolen mittens on their first date. Despite Gene's habit of preparing tuna on toast for her at dinner, they fell in love, moved to Washington, DC, and got married, all within a year. Gina was hired at the Peace Corps, and quickly learned Spanish. As the desk officer for five countries in Central America, she spent several years traveling. When she left the Peace Corps, it took two people to replace her. Gina and Gene bought a house on Capitol Hill got a Beagle named Emma Prudence (who went by "Cunning"), and had a daughter, Julia. In the 1980s, Gina studied art at the Corcoran School of the Arts in DC, and began a career as a watercolor artist. Two years following the death of Cunning, Gina and Gene got a new dog, Isabelle. Early in the 1990s, Gina began what would become two decades of teaching adult watercolor classes at the Capitol Hill Arts Workshop (CHAW). Gina's class became one of the Workshop's most enduringly popular offerings. There she made some of the best friends of her life and had profound effects on the lives of her students-including accomplished judges, architects, and U.S. Congress employees, among many others-all with aspirations to develop their artistic abilities. She nurtured their skills and creative instincts, enabling many to become excellent artists. She also taught them the Norwegian word grønnsaker (vegetables), which, in Gina's class, became a synonym for foliage or greenery. Gina promoted the value of a strong community among the students as a group, as well as strong friendships among individuals. These ties were reinforced as many continued learning during summertime "art camps" that Gina hosted annually in the mountains of western Pennsylvania. In 2012, Gina and Gene moved to Brooklyn, NY, to care for their newborn granddaughter, Raina Wolfgang Graeper. For the next six years, they provided daily care, did daycare pick-up and afterschool playdates. They did feedings, naps, trips to the park and museums, and played Calico Critters. Gina provided Raina with watercolor instruction and taught her the importance of a properly arranged palette. During this time, Gina and Gene also provided daycare, vacations, love, and a spot on the bed for Julia's beloved dog, Beausoleil, who co-existed mostly peacefully alongside their own dog, Susie. In 2018, Gina and Gene, with Julia, her husband Garth, and Raina, moved from Brooklyn to Pittsburgh. Gina and Gene settled in a beautiful condo in Oakland. In spring 2019, Julia and Gina attended an author reading at Carnegie, held in the very same room where she had studied art decades earlier. Gina died of a rare form of cancer at home on March 12, 2021. She is survived by Gene, Julia, Garth, and Raina, as well as her brothers Chandler (New York City), and Stephen (Pittsburgh). Donations in Gina's name may be made to the Salvation Army or Doctors without Borders. Professional services trusted to D'ALESSANDRO FUNERAL HOME and CREMATORY LTD., Lawrenceville. www.dalessandroltd.com.

Gina Pierce Clapp was born on June 11, 1945 in McKeesport, PA, to Anlaug H. Pierce and Chandler P. Pierce. She graduated from Elizabeth Forward High School, and then Boston University, where she earned a BA in political science. A few years... View Obituary & Service Information

The family of Gina P. Clapp created this Life Tributes page to make it easy to share your memories.

Send flowers to the Clapp family.