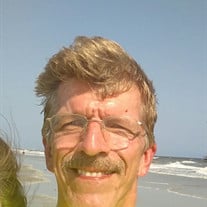 John Bradley Jacobsen, 58, died at home in Pittsburgh on April 4 after a quiet struggle with cancer. John was born November 14, 1958, in Honolulu, Hawaii, to Shirley Ann Garrett (White) and Leigh Jacobsen. Childhood residences included Indiana, Illinois, and Texas, but John moved to Carlsbad, New Mexico, at 15 and always considered it home. After graduating from Carlsbad Senior High School and briefly studying theatre at the University of New Mexico, he moved to New York City at 19 to pursue his dream of becoming an actor. There he was immediately cast in the touring production of Jesus Christ Superstar. In just one example of his willfulness, he refused to audition for the part requested and instead said he was there to play Caiaphas, which he did. John lived in New York City for several years and trained as an opera singer, eventually touring Italy in Rigoletto. Upon his return to the United States, he debated whether to further his opera career or take an offer to help build Florida Studio Theatre in Sarasota. He chose the latter. There his parts included the dentist in Little Shop of Horrors but his primary role was Associate Producer. During his tenure, Florida Studio Theatre grew exponentially, in part due to John's ability to convince community members of the importance of the arts. John was an active member of the Cultural Executives Committee, the Professional Alliance of the Performing Arts, and Big Brothers Big Sisters. Seeking a career and life change, John moved to Pittsburgh in 2003 at his sister's invitation?. His financial acumen at FST prepared him for a job as Business Banker at PNC, but he remained involved in the arts through the Greater Pittsburgh Arts Council. He also co-founded the Two Js Scholarship, which funds theatre arts education programs for children. An aggressively generous person who supported local artists, John was known for greeting strangers on Butler Street as friends and buying gifts for loved ones in North Carolina, Florida, and New York at neighborhood galleries. John is survived by his parents, brothers Chris Jacobsen of Albuquerque, Doug Gregory (Kara) of Houston, and sister Holly Middleton (Dawn Schmitz) of Charlotte. He is predeceased by beloved grandmother Faye Tucker of Carlsbad and brother James Tracy Jacobsen. A celebration of life will be scheduled for a later date, but memorial donations can be made to the Two J's Scholarship Fund by emailing [email protected] or sending a donation by mail to 1249 Palm St., Sarasota, FL 34236, attn Steve Turrisi. The family? wishes to thank David Leone, Bernadette Rice, and Dustin at D'Alessandro Funeral Home.

The family of John B. Jacobsen created this Life Tributes page to make it easy to share your memories.

John Bradley Jacobsen, 58, died at home in Pittsburgh on April...

Send flowers to the Jacobsen family.