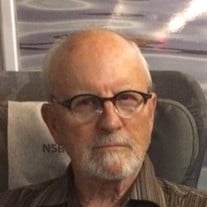 SHEPLER, Joseph R. "Joe" age 81, of Pittsburgh, PA. passed unexpectedly last week. Joseph "Joe", the son of Elizabeth Clark and Robert Shepler was born July 29th, 1937 in Pittsburgh, PA. Joe was the youngest of three children and is preceded in death by Betsy and Clark. Joe served in the US Navy, from '55-'59. Once Joe returned from his service he enrolled in and earned a Bachelor of Arts from Allegheny College. Further expanding his education, he pursued and earned a M.F.A. from Cranbrook Academy of Art. After resettling in Pittsburgh, he established himself in the local art scene and was a prolific, creative and brilliant painter to this day. Joe taught as a Professor of Art at Chatham College for many years. Joe married Martha Fairchild in 1964 and they had two sons together. Joe was preceded in his death by his parents and siblings, as well as his ex-wife and friend Martha Fairchild. Joe is survived by his sons, Robert Alexander (Tracy), William Byron (Liv Sorli) and four beloved grandchildren, Derek, Liam, Abigail and Olivia. As well as being an avid reader of art and history, he loved the movies, dark chocolate, traveling and visiting family, often taken him across the continent for many summers volunteering. Joe was very loved by his family, his friends and former students. Joe spent a lot of time maintaining the deep friendships he developed over the years. Joe was so intelligent, independent, generous and empathetic. Joe liked his routines. Joe was a remarkable and fascinating man, so curious, inquisitive and with numerous interesting stories to tell. Joe's art, as did his unswerving and curious personality, touched people and created responses; inspired enjoyment, wonder and sometimes anger, but never indifference. Joe could not be ignored. He embraced criticism with as much curiosity as he did with praise. Most of all, Joe was loved. There will be a short service at the Homewood Cemetery Chapel on Saturday October 13th at 11:00 AM, with a gathering of friends and family at the Gallery on 43rd Street at 12pm. I lieu of flowers we would ask for donations to some of the causes that were close to Joe's heart: Humane Animal Rescue, The Southern Poverty Law Center, Sierra Club. Professional services trusted to D'ALESSANDRO FUNERAL HOME and CREMATORY LTD., (Lawrenceville).

The family of Joseph R. Shepler created this Life Tributes page to make it easy to share your memories.

Send flowers to the Shepler family.