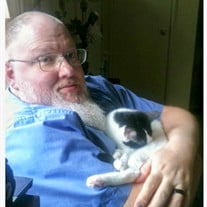 CHIODO, Keith, Keith Chiodo was born in Hermitage PA on November 29, 1961 and succumbed to liver failure on January 9, 2022. He is survived by his loving husband of 32 years, Steve Zupcic, his brother Robert Chiodo, and his beloved aunt Marie Karabincik to which Keith was particularly devoted. He was preceded in death by his parents Sara (Ball) and Frank Chiodo. Keith graduated Hickory High School in 1980, and continued his education at Indiana University of Pennsylvania and the University of Pittsburgh, focusing on the History of the Philosophy of Science and Judaic Studies. He pursued those studies in parallel with establishing a career in Information technology, achieving particular success at Children's Hospital of Pittsburgh. Keith also taught computer classes at the Community College of Allegheny County, and was active in Global Service Learning with Amazade, teaching in the Navajo Nation. He also enjoyed a stint as a Segway tour guide of Historical Pittsburgh. At the National Organization for Men Against Sexism's Men and Masculinity Conference (Menergy, 1989), Keith met his husband-to-be Steve. Both were active members in the Pittsburgh Men's Collective, and both found community and service in congregation Bet Tikvah. Steve and Keith visited Israel twice, where Keith was particularly moved by the depth of meaning of the Jewish homeland. Steve and Keith joined the queer Jewish Community while they lived in Tucson, and during that time they made a second trip to Israel as a part of a federation-sponsored community interfaith leadership mission, and Keith came to embrace a Zionist identity. Keith loved cats, and volunteered to care for them in Tucson at the Hermitage Cat Shelter; but his own cat Zachary held a special place in his heart. Here in Pittsburgh, he and Steve Co-Chaired the local host committee for the National Gay and Lesbian Task Force Creating Change Conference. His one brush with fame was as Trent Reznor's roommate while touring with the Exotic Birds, before Trent achieved stardom with that other band. Keith loved to travel, and in addition to Israel and Judaism, he developed a love for Japanese culture after a Semester at Sea trip. Travel provided opportunities to expand his pen collection and to sample local culture through another activity he enjoyed; experiencing and appreciating cultural influences on massage techniques. Keith's creature comforts were many and varied, including Science Fiction and Urban Fantasy, photography, making colored pencil drawings, Italian food, hot springs, waterfalls, and intimate gatherings with friends. Keith had a deep kindness and compassion at his core, a thirst for learning and appreciation, and a demeanor that supported a quiet and empathetic understanding of the people around him. May his memory be as a blessing. Services will be held on Sunday, at Homewood Cemetery, at 1 PM. Professional services trusted to D'ALESSANDRO FUNERAL HOME & CREMATORY LTD., Lawrenceville. Memorial donations may be made to https://givebutter.com/KeithChiodo www.dalessandroltd.com.

CHIODO, Keith, Keith Chiodo was born in Hermitage PA on November 29, 1961 and succumbed to liver failure on January 9, 2022. He is survived by his loving husband of 32 years, Steve Zupcic, his brother Robert Chiodo, and his beloved aunt Marie... View Obituary & Service Information

The family of Keith D. Chiodo created this Life Tributes page to make it easy to share your memories.

Keith Chiodo was born in Hermitage PA on November...