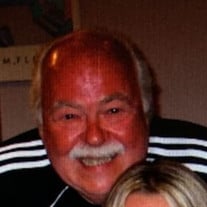 Keith McClean Yunk died peacefully in his hometown of Pittsburgh, PA on February 10, 2021 at the age of 77. Keith was born on February 27, 1943 to SSGT Harold Keith McClean and Virginia Ruth Pickard. Keith was only 7 ½ months old when his father, a Ball Turret Gunner on the B-17 called "Sad Sack", died during WWII. His mother remarried to John G. Yunk, Sr in 1945. John then adopted Keith. They had four children together, Karen Morgavo, John, Jr., Edward, and Gayle Yunk. In September of 1960, Keith joined the United States Navy and was assigned to an anti-submarine warfare team. Keith married Sharon Joyce of West Homestead in 1961. They were married for 18 years. They had three children, Brian and Timothy (Katie) Yunk, and Joyce (Bob) Lambert. He married Mindy Breakiron of Hopwood, PA. on September 22, 1990. He became stepfather to Terry and Joshua Blosser. They spent much of their life in West Mifflin, PA but in 2002, decided to move to Tampa, Florida to be with Joy and her family. He had a passion for cars, boats, trains, and motorcycles. He began racing the car that he had built at Motordrome Speedway and excelled from there. His team raced all over but took track championship at Roaring Knob Speedway. Keith raced boats on the river when his children were young. He had a handful of boats throughout his life, enjoying them on the Youghiogheny Lake, Monongahela River, and the Gulf of Mexico. He would tell stories about his racing life and about all the cars he rebuilt, and you would just see his ocean blue eyes light up. The best part of the stories was that he would not leave out a single detail about anything. Keith had the incredible talent to be able to fix anything, this man always had a wrench in his hand. Keith loved his friends as much as his family. Keith was a family-oriented kind of guy and would always be there if you needed him, no matter what the reason was, and no matter who asked. He was truly a free spirit with a heart of gold, a handy man who would fix anything with a motor. He was a loving grandfather/great grandfather to his 9 grandchildren and 6 great grandchildren. Keith truly did life his way!

Keith McClean Yunk died peacefully in his hometown of Pittsburgh, PA on February 10, 2021 at the age of 77. Keith was born on February 27, 1943 to SSGT Harold Keith McClean and Virginia Ruth Pickard. Keith was only 7 ½ months old when his father,... View Obituary & Service Information

The family of Keith McClean Yunk created this Life Tributes page to make it easy to share your memories.

Keith McClean Yunk died peacefully in his hometown of Pittsburgh,...

Send flowers to the Yunk family.