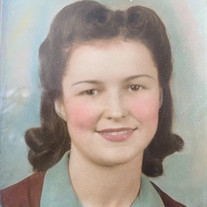 Margaret Jones Age 96, passed away peacefully in her sleep on January 24, 2021 at JAA Weinberg Terrace in Pittsburgh. She is survived by daughters Yvonne Renfrew of Los Angeles and Russellyn Carruth (Bernie Goldstein) of Anchorage and Pittsburgh; granddaughters Casey Carruth-Hinchey of Anchorage, Nicole Renfrew, and Danielle Renfrew Behrens; greatgrandchildren Joss, Vivienne and Hugo; and long-time caregivers Adam Fogarty, Tuwuanna Coward, and Lataija Barron of Pittsburgh. Margaret was very much part of the Great Generation. She had tragedy in her life, but she soldiered on without complaint. Her first husband, Captain Russell Greenwood, was a Marine fighter pilot who died in the Pacific Theater in 1944. At age 19, widowed, a single parent of an 11-month-old daughter, and four months pregnant with a second child she drove across country to settle with her parents in California. There, she built a new life, working as a secretary on a military base while her parents babysat. Margaret married her second husband, Robert Jones, in 1947. He adopted her two daughters and helped raise them as his own. He was an Army veteran of World War II, serving in the Engineer Corp in North Africa and Italy, rising to the rank of captain. Margaret chose well; he was a devoted family man until his death in 2011. After raising her children, Margaret rejoined the work force. She started as a secretary at her daughters' high school and progressed ultimately to executive assistant to the president of a California State College. Margaret was smart, capable, and efficient, but her education went only as far as high school and secretarial school. Her daughters (both lawyers) are convinced that, if she had been born 20 years later, she would have been the college president, not just his executive assistant. Elegant, practical, down-to-earth, Margaret had many other talents beyond her professional prowess. She was a true domestic goddess (she was a master seamstress and knitter; she loved baking with her granddaughters; she was a great cook and loved hosting dinner parties; she made preserves with fruit from her garden). A perfectionist, she tended to nag Dad in the course of their many joint DIY projects, such as planting a lawn, after first building a kidney-shaped brick surround to make a level bed. She had an amazing spatial sense - whether cutting wrapping paper, packing the trunk of our car, or choosing a plastic container for dinner leftovers. She enjoyed games of skill and chance, e.g., bridge, bingo, and slot machines, and she usually won. She was warm and charming with everyone, especially men (she liked to flirt). As she grew older, her ability to do most activities waned. But she was still flirting at age 96. Cremation services provided by D'Alessandro Funeral Home and Crematory Ltd., Pittsburgh. Gifts in Margaret's memory may be made to JAA Weinberg Terrace, 5757 Bartlett Street, Pittsburgh, PA 15217.

Margaret Jones Age 96, passed away peacefully in her sleep on January 24, 2021 at JAA Weinberg Terrace in Pittsburgh. She is survived by daughters Yvonne Renfrew of Los Angeles and Russellyn Carruth (Bernie Goldstein) of Anchorage and Pittsburgh;... View Obituary & Service Information

The family of Margaret C. Jones created this Life Tributes page to make it easy to share your memories.

Age 96, passed away peacefully in her sleep...

Send flowers to the Jones family.