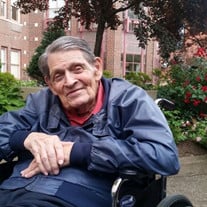 Martin Arthur Pochapin died on Thursday, June 25, 2020, at the age of 94. Affectionately known by many as 'Marty,' he was born and raised in the Squirrel Hill neighborhood of Pittsburgh, but traveled near and far. He was friendly, talkative, and known by name everywhere he went. He was a WWII Veteran who served under General George S. Patton, an Advertising Salesman, a Patron of the Arts, an avid Baseball Fan, and a Connoisseur of Dining who never went a day in his life without eating something sweet. He lived a long and healthy life and was most proud of his family; wife Marsha Pochapin (deceased), Father and Mother Dr. Irwin M. and Bessie Finkelpearl Pochapin (deceased), Brother Dr. Sherman W. Pochapin (deceased), his surviving children, Pamela and Emil M. Quatchak (daughter and son-in-law), Robi Pochapin, Carol Darwish, and Miriam Pochapin (son, daughter-in-law, and granddaughter), Kevin and Deanna DiGioia Pochapin, and Pablo and Antonia Linzoain (son, daughter-in-law, and step grandchildren), Allison Pochapin (daughter), and his cousins, nieces and nephews. The family extends a special thank you to the administrators, doctors, nurses, and entire staff of Canterbury Place and Family Hospice for loving him and caring for him so well in his final years and days. Services will be held under current CDC guidelines at D'Alessandro Funeral Home and Crematory Ltd., 4522 Butler Street in Lawrenceville, on Sunday, June 28. Visitation begins at 11:00 AM with a service at the funeral home at 1:00 PM, followed by burial at West View Cemetery, Ross Township, where he will receive military honors. Contributions suggested to: UPMC Canterbury Place Interfaith Pastoral Care Program, Medical and Health Sciences Foundation, UPMC Senior Services, 3600 Forbes at Meyran, Suite 8074, Pittsburgh, PA 15213; or the Support the Met Broadcasts Campaign, The Metropolitan Opera, Lincoln Center, New York, NY 10023 whose Saturday Matinee Radio Broadcasts Martin listened to faithfully since childhood.

Martin Arthur Pochapin died on Thursday, June 25, 2020, at the age of 94. Affectionately known by many as 'Marty,' he was born and raised in the Squirrel Hill neighborhood of Pittsburgh, but traveled near and far. He was friendly, talkative,... View Obituary & Service Information

The family of Martin Pochapin created this Life Tributes page to make it easy to share your memories.

Send flowers to the Pochapin family.