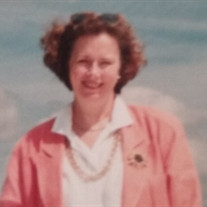 Mary Jo Wilson, 1940 - 2019 Mary Jo Wilson left family and friends on New Year's Day, 2019. She was born August 22, 1940, in Moundsville, West Virginia, to Ken and Hermina Wilson. She attended Charleroi High School in Pennsylvania and was part of the graduating class of "58." She is survived by her brother, Ken Wilson (Natalie), her sister, Louisa Zadecky (Lenny), her son, Charles Wilson, whom she proudly referred to as her "greatest achievement," and by numerous nieces and nephews. Mary Jo built a long career as an able and devoted administrative assistant, first to the Chancellor of the University of Pittsburgh, then to the Chairman of the URA and Port Authority, and, finally, as AA to the Director of Shady Lane School, the position from which she retired. Perhaps her most outstanding virtue was her loyalty -- loyalty to her friends, her city, and her causes: A font of information on friends and family, she kept everyone abreast of their most recent doings, so that even those who had never met knew the latest challenges and achievements of the others. An unfailing Pittsburgh booster, from its sports teams to its universities, to its public celebrations, she loved her town and took personal pride in its growing reputation as a great place to live. And until physical impairment overtook her strength, Mary Jo was an impassioned champion and dedicated volunteer for the social and political causes she believed in. She is and will be missed. A Memorial Service is being planned for the future. Memorial Contributions may be made to a charity of your choice. Professional Services trusted to D'Alessandro Funeral Home and Crematory Ltd., Lawrenceville.

The family of Mary Jo Wilson created this Life Tributes page to make it easy to share your memories.

Send flowers to the Wilson family.