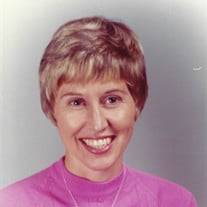 Nancy Davis Hosford, 87, passed away peacefully on September 29, 2020 at Chapel Pointe in Carlisle, Pennsylvania. Nancy was born on July 6, 1933 to the late Benjamin and Bertha (Rund) Davis in Boston, Massachusetts. She is preceded in death by her parents, her sister, Jane, and husband, Jon. Nancy's family moved from Squantum, Massachusetts to her father's homeland of the Lake Sunapee-New London, area of New Hampshire in 1942. In 1947, her family purchased a cottage on Great Island on Lake Sunapee, which became one of her most favorite places in the world. She graduated from New London High School in 1951. After high school, she attended Forsyth School for Dental Hygienists in Boston and worked in Greenfield, Massachusetts as a dental hygienist. In Greenfield, she met her husband, Jon, and moved to Pittsburgh, Pa for Jon's work. Starting in the late 1960s as a single mother of two, she began working for Gateway School District in Monroeville, Pa as their dental hygienist, educating K-12 students about dental health. Hundreds of Gateway students will remember her in the classroom, teaching them how to brush and giving them little pink fluoride tablets. She also worked part-time for many years in a local dental office creating deep, lifelong friendships with her coworkers there. In the mid-1980s she began taking college courses at night and during the summer, earning her BS in Education and eventually her Master's Equivalency. She taught first grade for Gateway at Pitcairn Elementary School for ten years and retired in 1998. Nancy was intelligent, witty, and accomplished in so many things. She was a strong athlete, always touting the benefits of being outdoors. She practically lived outside as a child, walking to and from school through tough New England winters. She starred on her high school basketball team and played tennis as an adult. She loved to hike and took her first backpacking trip to the bottom of the Grand Canyon in Arizona when she was 67 years old, one of the highlights of her life. She was hiking New England mountains well into her seventies. Her love of the outdoors was apparent in what she chose to do with her children - car trips, tent camping, sailing, skiing, swimming, and exploring. Nancy had a great love of classical music and learned to play her mother's cello while in her forties. She performed in a quartet and for musicals at Gateway High School. She played the piano throughout her life and loved live orchestral and opera performances. She was also an accomplished seamstress, making many of her own clothes. She took up quilting later in life, creating beautifully artistic quilts, pillows, and wall hangings. Nancy was passionate about reading and loved non-fiction and historical fiction novels, especially WWII history. She served for a time on the board of directors of Monroeville Public Library and enjoyed helping with their annual book sale. Independent and pragmatic, Nancy continued to learn throughout her life. She liked to study maps, do crossword puzzles, listen to audio books, and attend lectures. She enjoyed learning about holistic health and strived to keep herself healthy and strong. Every lunch included handful of carrots and a glass of whole milk. One of the other highlights of her life was when she met Robert Wolfe with whom she would spend 35 years in delightful companionship. Together they had many adventures including traveling to Cabo San Lucas, Mexico to view Halley's Comet in 1986. Over the years, they traveled to Alaska, Oregon, California, Arizona, and throughout New England. She and Bob enjoyed many seasons of Pittsburgh's fine theatre and ballet performances. They shared common interests in tennis and cycling, astronomy, natural history, world history, grammar, politics, and inventing things to make the world a better place. They spent many peaceful Sundays on Bob's back deck reading the New York Times and watching birds at the feeders. Nancy and Bob spent vacations with Bob's daughters and their families, as well as Nancy's daughter and her family. She could always be counted on to go for a hike, play a game, make chocolate chip cookies or linguine with clam sauce, clean up the kitchen, read a book to the kids, and fix what needed to be fixed. With her brilliant smile, vivacious personality and generous heart, she was a loving and attentive "Boba," doting on her grandsons and being a best friend to her daughter. Nancy moved to central Pennsylvania in 2016 to be close to her daughter as it became apparent she needed personal care. She lived for a time at Green Ridge Village in Newville, where the woodland setting reminded her of her New England home. In 2018, she moved to a skilled nursing household at Chapel Pointe in Carlisle. Nancy is survived by her son, Sven Eric Hosford; daughter Holly (Ed) Smith and their two sons; several nieces; and her companion, Robert Wolfe. Nancy will be interred at Penn Forest Natural Burial Park, Verona, Pa. In lieu of flowers, donations in her memory can be made to Lake Sunapee Protective Association (Sunapee, NH), Monroeville Public Library (Monroeville, Pa), City Theatre (Pittsburgh, Pa), or a conservation organization of your choice.

Nancy Davis Hosford, 87, passed away peacefully on September 29, 2020 at Chapel Pointe in Carlisle, Pennsylvania. Nancy was born on July 6, 1933 to the late Benjamin and Bertha (Rund) Davis in Boston, Massachusetts. She is preceded in death... View Obituary & Service Information

The family of Nancy D. Hosford created this Life Tributes page to make it easy to share your memories.

Send flowers to the Hosford family.