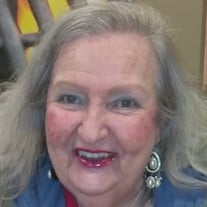 Patricia Anne Bernadette Agresta Smith (née Upole), fondly known as "Ma", passed away peacefully on Sunday, November 18, 2018 at the age of 77. Patricia was born on June 25,1941 in Glen Dale, West Virginia to the late Richard O. and Nell T. Upole. In her teens she moved with her mother to Steubenville, Ohio where she attended Catholic Central High School and the College of Steubenville, and became increasingly involved in the family businesses, including The Steubenville School of Cosmetology, The Boulevard Motel/Sportsman's Lounge and The Happy Hour Bar. She also passed the civil service exam and graduated from DRET School in Travel and Tourism. In 1988 she moved to Costa Rica where she acquired residential status and became fluent in Spanish. She returned to the States in 2003, residing first in Lawrenceville then the South Side of Pittsburgh, PA. An accomplished organist, Patricia played professionally in her younger years and wrote several songs. She was both a perfectionist who loved puzzles and attention to detail, and a free spirit who enjoyed games, dancing, traveling, taking photographs and meeting new people. She is survived by her daughters, Tina-Lisa A. (Nick) Parrilla and Jacinta A. (Peres Nyabinda) Mendes of Pittsburgh; grandchildren Amanda C. Zascavage of Waco, TX; Roxanne R. (Matthew Thias) Zascavage of Ft. Worth, TX; and Jacyn B. Olella of Pittsburgh; great- grandchildren Huck McEowen, Elliot McEowen and Maddox Thias of Ft. Worth. A Funeral Mass is scheduled for Saturday, December 15, 2018 at 2:00 pm in Lawrenceville at Our Lady of the Angels Parish, 225 37th Street, Pittsburgh, Pa, 15201. All are welcome to attend and celebrate Patricia's life. In lieu of flowers, kindly send donations to: https://www.gofundme.com/mas-memorial-fund The family would like to thank Dr. Stasa Tadic, Dr. Phil Lamberty and the ICU team at UPMC Presbyterian Hospital for their excellent care, efforts and support. "LIVE LOVE"

The family of Patricia A. Smith created this Life Tributes page to make it easy to share your memories.

Send flowers to the Smith family.