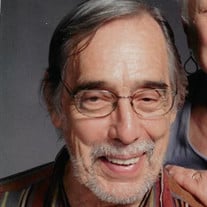 Raymond. J. Schinhofen Age 86, passed away on February 15, 2021, from complications of the corona virus. A native Pittsburgher, Ray received his degree in architecture from Carnegie Institute of Technology (now Carnegie Mellon University). He was in private practice for over 40 years, designing residential, commercial, and institutional projects and receiving numerous awards for historic restoration and contextual historical design. In addition, Ray served on the City of Pittsburgh's Art Commission and as Board President of the East End Food Co-op. He was a longtime member of the First Unitarian Church of Pittsburgh, serving on the Building Committee as well as the Green Sanctuary Team, which he helped to establish. Ray was also instrumental in having a geothermal heat pump system installed at First Church, translating his environmental principles into reality. For many years, he taught "Exploring Pittsburgh's Architectural Heritage" for Osher at Carnegie Mellon University, bringing to the classroom what has been described as an irresistible enthusiasm for his subject and ending the course with a walking tour through downtown Pittsburgh, urging everyone to "Look up! Look up!" Ray loved to travel, and among his most cherished memories were trips to Europe, especially to Florence, and the annual summer vacations he spent with his family on North Carolina's Emerald Isle. He was interested in everything and everyone and he will be remembered above all for his zest for life, his masterful storytelling, and his tendency to burst into song for no apparent reason. He was also an exuberant host — the annual New Year's Eve parties "at the Schinhofens'" remain the stuff of legend. Ray is survived by Mary, his beloved wife of nearly 67 years; their children Kate (Steve Flatten), Jeannemarie, Lisa (Howard Waxman), David (Kristen Pett), and Jonathan (Beth Myers); grandchildren Mija, Korey, Makala, Watumbe, Devin, Dylan, Rayna, David, Nevin, and Isadora; and great-grandchildren Sofia, Bella, and Bodhi. A memorial service will be held at the First Unitarian Church at a date to be announced.

The family of Raymond J. Schinhofen created this Life Tributes page to make it easy to share your memories.

Send flowers to the Schinhofen family.