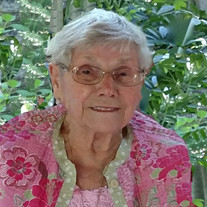 Reba Josephine Nadell Roberts Born November 25, 1915, Reba celebrated her 100th birthday with her family almost a year ago. She passed away peacefully Saturday, August 27, 2016. Reba was the loving wife of the late Cyril Roberts; beloved mother of the late Jay Paul Roberts of Waterloo, Iowa and Dr. Thom Roberts and Bett Ziesche Roberts of Sewickley, PA; cherished grandmother of Jay R. and Mechelle Roberts of Centennial, CO; Jeff and Meg Roberts of Bay Village, OH; Josie Roberts Karash and Matt Karash of Orlando, FL; Chris and Suzanne Roberts of Franklin, TN; adoring great grandmother of Tai, Lily, Ryan, Lauren, Griffin, Olivia, Will, Andrew, Leo, Kyler and Nicholas-- the family she treasured above all, a family who brought joy to her life. Reba grew up on Pittsburgh's North Side, attended Allegheny High School, and graduated from Carnegie Tech (now Carnegie Mellon University) in 1938, with a Bachelor of Science degree in nursing. She began her career as a public health nurse in the city of Pittsburgh. Later she earned her teaching degree and taught 5th grade at DeHaven School in Glenshaw, PA. Always active, she achieved Life Master status in duplicate bridge and played golf and tennis until she was 80, quitting only after sustaining injuries in a car accident, which took her husband's life. She never gave up, wouldn't accept inactivity, and fought her way back to independence. Throughout her entire life she overcame adversity, accepting what life dealt her, never complaining, always going on. A remarkable woman, Reba was a role model to her family, an inspiration to all who knew and loved her. Her services will be private. Professional Services by D'Alessandro Funeral Home and Crematory Ltd., Lawrenceville

The family of Reba J. Roberts created this Life Tributes page to make it easy to share your memories.

Send flowers to the Roberts family.