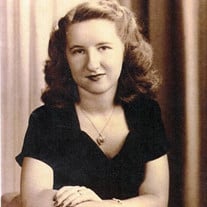 Roberta "Bobbie" Williams Ford, 91, of Butler, Pennsylvania, passed away on March 21, 2022. Bobbie was born on July 12, 1930, in the East Liberty neighborhood of Pittsburgh. She was preceded in death by parents Jane McCready and Robert Williams, sister Patricia Holman, and her beloved husband of 71 years, Raymond H. Ford. Bobbie is survived by children Jennifer, Glenn (Laura Kunkel), and Rebecca (Dean) Ridgeway; grandchildren Adam (Kelly Thomas), Sarah (Evan Richards) Ford-Richards, Jacob (Zoie Diana), and Madelyn Ridgeway; and great-granddaughter Charlotte Grace Mapleton Richards. Bobbie was a deeply loved mother, grandmother & great-grandmother and will be missed beyond words. Bobbie left this earth to be with the Lord and her beloved husband just 60 days after he passed. One being without the other was unimaginable. Bobbie and Ray met in 1945 when they were sophomores at Peabody High School. They were married on January 27, 1951, at Chatham College Chapel, took the bus to Bedford Springs for their honeymoon, and remained deeply in love from that day forward, always signing cards to one another "All My Love, All My Life." Bobbie was the head majorette at Peabody High School and led many parades in Pittsburgh & Gettysburg, where her dad was from. She attended Pittsburgh Institute of Aeronautics, where she received her secretarial degree and began her career at a law office downtown. Later in life, she went back to school to get her real estate license and was an agent at Shalerglen Realty. She loved antiques so much she opened a store called Top Drawer Antiques. Bobbie was a lifelong learner; she would attend classes to learn more about the hobbies she loved, including baking, cooking, antiquing, upholstering, and gardening. Bobbie's love for all was evident in how you were lovingly welcomed into their home; this was a value instilled in her by her parents and theirs before. The door was always open, and there was always a baked good or two ready to share. She was raised at East Liberty Presbyterian Church and continued a lifelong love and service to the Lord. She later belonged to Glenshaw Valley Presbyterian Church, where she was an Elder, taught Sunday school, summer vacation Bible school, and was on the nominating committee. Her last home church was St. Paul's United Methodist in Allison Park. Bobbie was a blessing to all that knew her. Bobbie has also been reunited with dozens of gone-but-still-missed dogs of all sizes. We're certain that a few in particular-Mac, Sam, and Sparky ran to meet her. In lieu of flowers, donations can be sent to Butler Memorial Hospital or St. Paul's UMC. Viewing will be held at St. Paul's United Methodist Church in Allison Park, PA, at 10 a.m. Service will be held directly after at 11 a.m. A zoom link will be made available for those who cannot attend in person. After, the family will attend a private graveside at Homewood Cemetery. Professional services trusted to D'ALESSANDRO FUNERAL HOME & CREMATORY, LTD., Lawrenceville. www.dalessandroltd.com.

Roberta "Bobbie" Williams Ford, 91, of Butler, Pennsylvania, passed away on March 21, 2022. Bobbie was born on July 12, 1930, in the East Liberty neighborhood of Pittsburgh. She was preceded in death by parents Jane McCready and Robert Williams,... View Obituary & Service Information

The family of Roberta Lee Ford created this Life Tributes page to make it easy to share your memories.

Send flowers to the Ford family.