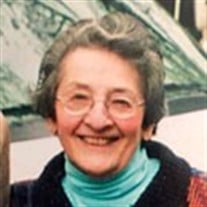 Ruth Solomon (Milligram) Of Pittsburgh, Pennsylvania, passed away on June 20, 2016. She had been a patient at Shadyside Hospital and later the Sivitz Hospice for several days. The daughter of the late Alvin and Margaret Weinberg Milligram, Ruth grew up in Harwick, Pennsylvania where her parents owned Milligram's General Store. Ruth married the late Seymour Solomon upon his return from service during World War II and they joined her parents in business. The couple eventually took over the store and retired in 1981. The Solomon Family moved to Squirrel Hill in 1967 where Ruth lived until her passing. When Ruth was a teenager, and her parents moved the family to New Kensington, she began studying music as a mezzo soprano. With her friend, soprano Mary Gores, Ruth starred in "Gems of Music," a radio program on New Kensington's WKPA. After graduating from New Kensington High School, she studied with renowned Pittsburgh voice teacher Madame Sylvie Derdeyne and later with Nicolai Lapatnikoff of then-Carnegie Tech and Lorenzo Malfatti of the Chatham College Music Department as well as with Mimi Lerner. She performed as a soloist at the Syria Mosque, Pittsburgh Center for the Arts, Synod Hall and Carlow College. Ruth was a member of the Pittsburgh Symphony's Mendelssohn Choir for over 20 years and, at the age of 70, joined the choir for a European tour. It was during the tour that the choir visited Auschwitz Concentration Camp where she was able to say Kaddish, the memorial prayer, for her grandparents who perished there during World War II. Ruth is survived by her loving children, Michele Fryncko (Kenny) and Jeffrey Solomon (Aileen); grandchildren, Jason Baer (Daniell), Kenneth Fryncko, Jr. (Gail), Stephanie Fryncko, Adam and Melissa Solomon; and great-grandchildren, Olivia and Alexa Baer, Owen and Cealy Fryncko and Nicholas Rodgers. Along with her husband and parents, she was preceded in death by her beloved brother, Dr. Emerson "Neil" Milligram and an infant brother, Jerome Seymour. For those so inclined, memorial donations in Ruth's name may be made to the Alvin and Margaret Weinberg Milligram Memorial Scholarship Fund of Adat Shalom Synagogue, 368 Guys Run Road, Cheswick, PA 15024 or Young Peoples Synagogue, 6404 Forbes Avenue, Pittsburgh, PA 15217. Services and burial will be private. Arrangements trusted to D'ALESSANDRO FUNERAL HOME and CREMATORY, LTD., Lawrenceville.

Ruth Solomon (Milligram) Of Pittsburgh, Pennsylvania, passed away on June 20, 2016. She had been a patient at Shadyside Hospital and later the Sivitz Hospice for several days. The daughter of the late Alvin and Margaret Weinberg Milligram,... View Obituary & Service Information

The family of Ruth Solomon created this Life Tributes page to make it easy to share your memories.

Send flowers to the Solomon family.