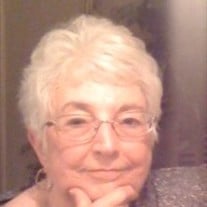 Sandra Stephen McCarty, of Allison Park, Passed away comfortably Thanksgiving eve, November 25, at the age of 82. She is survived by her loving husband of 38 years, James McCarty, a daughter, Tracey Teagan, a brother, Joseph Stephen, four step-children, Kerry and Keith McCarty, Merritt Fasic, and Kelly Ackerson, eleven grandchildren, and four great grandchildren. Sandy received a BA degree from Youngstown State University and a MFA degree in Art History from the University of Pittsburgh. Following graduation, she taught art history at Chatham University in Pittsburgh. In addition to being a practicing artist, she also became a prolific free-lance writer, working on corporate, educational, academic, social, and political projects. As a writer, Sandy developed a keen interest in the Murder Mystery genre and authored award-winning works. She acted as a mentor/coach for other budding mystery novelists in the local Mysterywrites support group, where two members became published authors. She was also a member of Pennwriters and Sisters in Crime, a national organization supporting aspiring and accomplished women authors of crime fiction. She has always had a passion for the arts, supporting and enjoying the Pittsburgh Symphony, local and regional theaters, and the many Carnegie venues, in addition to theater performances in New York. A lover of classical music and opera, she also enjoyed the transformation/progression of music through the years, including the blues, jazz, rock and folk. Good food was another passion. Raising Tracey as a single mom, dining out frequently at fine restaurants was not an option, so she learned to prepare succulent meals on her own. Cooking became a major part of her life and she developed into a self-taught gourmet chef. Those who have enjoyed her cooking will attest to her amazing culinary skills, Sandy had an unquenchable thirst for knowledge and absorbed it like a sponge. An avid reader and follower of the news, she strove to always be up to date and completely informed on all subjects; particularly politics, education and the arts. She became an avid supporter of equal rights for women in the sixties and seventies, which continued until her passing. Throughout her life, she maintained a charming sense of humor which spewed forth until the very end. Sandy never missed an opportunity to bring about a laugh, a chuckle, or a grin. No immediate funeral services are planned due to COVID-19. There will be a Celebration of Life event for family and friends in the future. Details to be announced. Condolences to [email protected] . Any remembrances/memorials should be sent to the American Civil Liberties Union, 247 Ft. Pitt Blvd., Pittsburgh, PA 15222, or to the Greater Pittsburgh Community Food Bank, 1 North Linden Street, Duquesne, PA 15110, on behalf of Sandy.

The family of Sandra McCarty created this Life Tributes page to make it easy to share your memories.

Send flowers to the McCarty family.