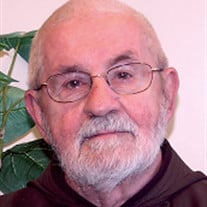 FATHER SENAN GLASS, OFM Cap. Father Senan Glass, OFM Cap. died on Saturday morning, December 26th, following a short residence at Manor Care Nursing Home in the North Hills area of Pittsburgh, where he had been undergoing rehabilitation following treatment for an infection at Shadyside Hospital, Pittsburgh. He was 89 years old. He is survived by his sister Rose Marie (+William) and was preceded in death by his parents, Paul R. and Rose E. (Showman) Glass, and siblings Harry, James, Agnes (Mastricola) and Jerry. Born on February 27, 1930 in Uniontown and raised in Brownsville, he was given the name Paul by his parents at his baptism at St. John Parish in Uniontown. He began his education at St. John parochial school and completed elementary school at St. Peter School in Brownsville before entering St. Fidelis High School and College Seminary in Herman, PA in 1944. He continued in the College program and entered the Capuchin Novitiate in Annapolis, MD on July 13, 1951, where he was invested with the name "Senan" before professing vows on July 14, 1952. He returned to collegiate studies at St. Fidelis, graduating in 1954 and moved on to study Theology at Capuchin College in Washington DC. He was ordained to the priesthood on June 8, 1957. Father Senan spent 23 years in the Capuchin mission in Papua New Guinea, largely in the parishes and bush stations of the Southern Highlands Province. After his return from Papua New Guinea at the beginning of 1982 he took a course in Marriage Counseling through The Catholic University of America and thereafter spent four years working with Engaged Encounter from 1982 until 1986. Following a six month sabbatical he returned to full time parochial ministry in Dover and Mineral City, OH and then as rector of the Shrine of the Conversion of St. Paul and pastor of Holy Trinity/St. Edward parish in Cleveland from 1993 until the millennial year 2000. He then embarked on a "Working Sabbatical", providing pastoral and ministerial support in Charleston, WV, Philadelphia, and Nassau in the Bahama Islands before taking up permanent residence at St. John the Evangelist Parish in Philadelphia where he ministered for the next sixteen years, through October, 2016. Because of the onset of dementia and many physical limitations he came to St. Augustine Friary in Pittsburgh in 2018 to begin his "formal" retirement at the age of 88, continuing his life of prayer in service to the Province and the Church. Upon his first vacation after beginning his Papua New Guinea missionary work, he returned home to visit family and friends. During an interview by the Greensburg diocesan newspaper he was asked what he missed most of all in his remote mission and he replied "Ice cream; chocolate ice cream." The friars at St. Augustine made sure he was well supplied each night with his beloved dessert once he came to Pittsburgh. His parishioners in Philadelphia can attest that Father Senan took great joy in celebrating Mass and was known to regularly sing through the entire liturgy with the exception of his homily. Father Senan was a physically robust man throughout most of his life. Beyond his decades of bush walks in the mountainous Southern Highlands of Papua New Guinea, he kept up on his exercise through swimming, cycling and camping into his seventies. Everyone was caught off guard when a routine checkup in 2009 revealed a dangerous level of blockage in the arteries around his heart that required emergency surgery to insert several stents. One of the friars was visiting when his cardiologist came into the room with x-rays to show how close a call he'd had. Father Senan looked at the images and replied with a touch of longing, "Oh, look how close I was to finally seeing Jesus!" God kept him waiting for eleven more years, but on the morning after Christmas, 2020 God granted him the gift that he had desired for so long. There will be visitation and viewing at Saint Augustine Friary Chapel, 221 36th Street, Lawrenceville, Pittsburgh on Monday, December 28 from 7-8 PM, followed by a vigil service at 8 PM. The funeral Mass will be celebrated at Saint Augustine Church, Our Lady of the Angels Church, Lawrenceville, on Tuesday, December 29 at 10 AM. Burial will follow at Saint Augustine Cemetery. Memorial donations may be made to: Capuchin Franciscan Friars, 220 37th Street, Pittsburgh, PA 15201.

The family of Senan P. Glass OFM Cap. created this Life Tributes page to make it easy to share your memories.