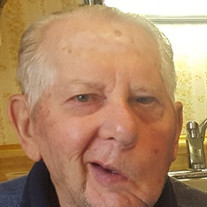 Sylvan "Sonny" Simon, aged 91, of Monroeville and more recently Forest Hills, passed away peacefully from natural causes on December 30, 2019. He is survived by Shirley, his devoted wife of 68 years, his loving children Steven, Arlene and Barbara Simon, and grandchildren Ashley and Rachel Simon. He is predeceased by his sisters Helen Simon, Dorothy Simon Gross and Ruth Simon Cicero and their husbands. Mr. Simon grew up in the Hill District of Pittsburgh and graduated from Alderdice High School in 1945. He joined the Army Air Forces immediately upon graduation where he excelled as a radio communications specialist. In response to the horrific tanker explosion near Galveston, TX in 1947, he deployed with the response team and received Commendation for his valor and devotion to duty for unhesitatingly aiding in evacuation and administering first-aid to survivors with total disregard for personal safety. Mr. Simon later attended the University of Pittsburgh, then married his sweetheart Shirley Solomon and moved their young family to Monroeville where they lived for 59 years as he built a successful career in the grocery packaging business, winning numerous sales awards for exceptional performance with International Paper. He could be counted on in anyone's time of need. He lovingly and faithfully took care of his oldest sister, Helen, prior to her early death in 1969, his mother and father in law David and Rae Solomon, and Shirley's aunt and uncle - our beloved Aunt Hettie and Uncle Ash. He was a very generous man, and when a good friend needed help, dad was there with no questions asked. To his family, this personified our father. We love you dearly and will miss you always. Family and friends will gather at D'Alessandro Funeral Home and Crematory Ltd., 4522 Butler St. Pgh., PA 15201 (Lawrenceville) on Friday, January 3, 2020 from 11am until the time of a service at 12:00. In lieu of flowers, donations may be sent to the National Anti-Defamation League.

Sylvan "Sonny" Simon, aged 91, of Monroeville and more recently Forest Hills, passed away peacefully from natural causes on December 30, 2019. He is survived by Shirley, his devoted wife of 68 years, his loving children Steven, Arlene and Barbara... View Obituary & Service Information

The family of Sylvan Simon created this Life Tributes page to make it easy to share your memories.