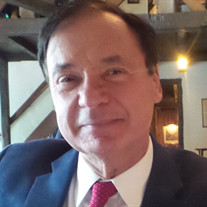 Thomas Francis Rosenkranz Passed away on Wednesday, April 24, 2019 due to complications with pancreatic cancer. He was a beloved father, grandfather, uncle, boyfriend, friend, professor of chemistry and music lover. He lived life on his own terms and his unique character and charm will be greatly missed. Thomas Francis Rosenkranz was born February 13, 1950 in Brooklyn, New York to parents Margaret and Jerry Rosenkranz. Shortly after his birth they moved to Spotswood, New Jersey where he grew up with his brothers James and John and sisters Gina and Geraldine. During his youth he became interested in music, the sciences and martial arts. He excelled at them all and these became life-long passions for him. In high school he began learning the trumpet and quickly found a musical home performing with the school's bugle corps called The Flames together with his younger brother John. In addition to his love of music, he also had strong interests in the martial arts and became a second degree Black Belt in Shodokan, Karate. He would work on the weekends at the flea market in Englishtown, New Jersey and It was there that he was introduced to his future wife, Maureen Cosgrove. They were married on February 8, 1976 and had three sons, Thomas in 1977, James in 1980 and John in 1982. They moved from New Jersey to California in 1978. Tom attended Rutgers University and Capital University where he obtained degrees in Business and Chemistry. Early in his career he excelled in the field of Optics and was part of the team that helped develop the first laser disc technology. Continuing with his love of Chemistry, he recently became a part-time professor of Chemistry at Robert Morris University and the Community College of Allegheny County in Wexford in Pennsylvania where he was not only known for his incredible knowledge of the subject but also for his wit and dry humor in the classroom. He enjoyed putting on a bow tie and tuxedo and enjoyed any occasion to have a night on the town. He loved attending the annual American Heart Association Ball in Pittsburgh with his girlfriend, Kimberly Lewis. On the weekends and holidays he could be seen taking long rides on his motorcycle often riding into the sunset, the same thrill that he enjoyed during his youth. There will be a Memorial Service on Sunday, May 19th at 3pm at Christian Life Church. 900 7th Street, Trafford PA. 15085. Professional Services trusted to D'Alessandro Funeral Home and Crematory Ltd., Lawrenceville. www.dalessandroltd.com

Thomas Francis Rosenkranz Passed away on Wednesday, April 24, 2019 due to complications with pancreatic cancer. He was a beloved father, grandfather, uncle, boyfriend, friend, professor of chemistry and music lover. He lived life on his own... View Obituary & Service Information

The family of Thomas F. Rosenkranz created this Life Tributes page to make it easy to share your memories.

Send flowers to the Rosenkranz family.